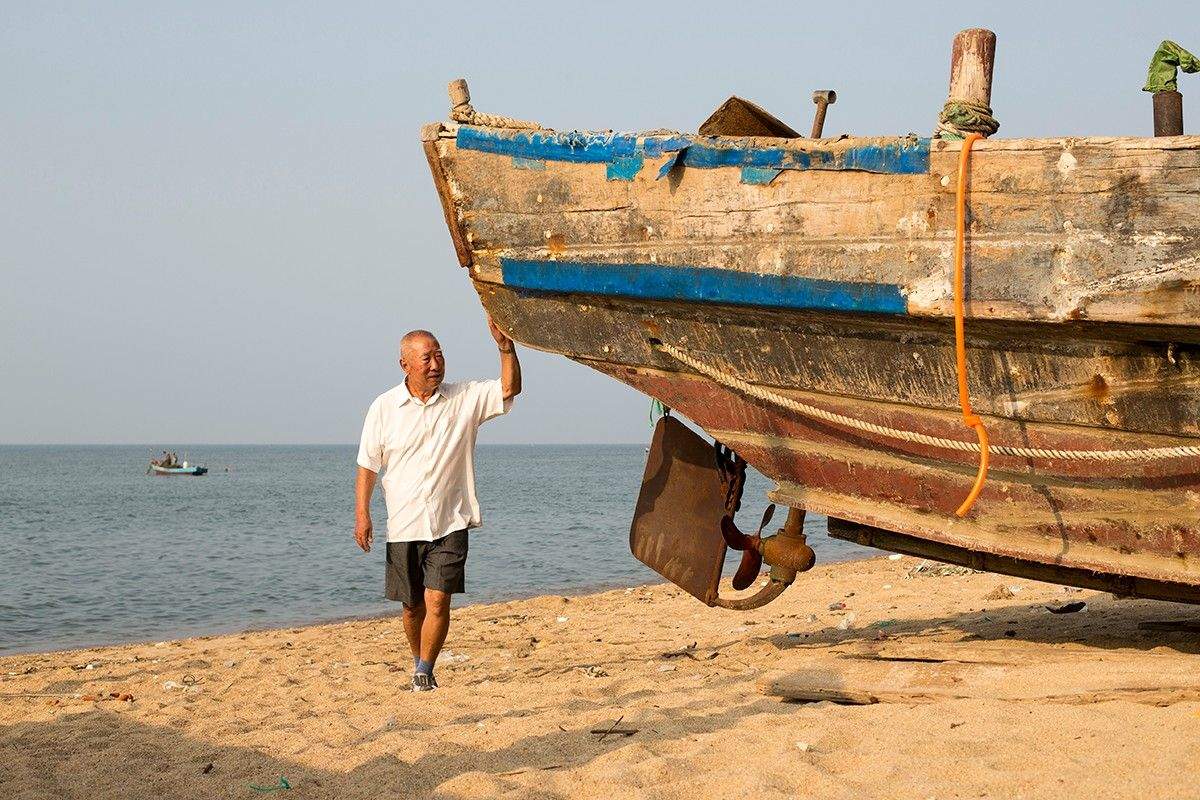 photo from e.news.163.com by Greenpeace

Several ducks swim on the river surface. Sometimes they fight each other over small fish. Sometimes they play for fun and are oblivious to danger. A man advances toward them quietly, suddenly he moves fast, aims at one of the ducks with a pot, raises his arm: a duck gets caught.

Xie Mingju, 42, was a fisherman for almost 30 years owning a boat on XinJin River that he would take out to sea. Now he seldom goes out and raises ducks and pigs instead. Although Xie and his wife Pang Jie have turned to pig and duck farming, they cannot escape the slow pollution of the waters around them whether in the sea or the river.

“Once in October every year, Kingfish appears in River Xin Jin. Now this kind of fish is dying out and we rarely see them,” Xie said. Kingfish used to fetch a price of 80 Yuan per kilo.

There are about 60 boats in Yong’an Village and Xie knows almost all of them. They used to go fishing together, but now many of them have changed their jobs. Some are drivers, others have started businesses. Last year, he raised about 100 pigs and this year he has raised almost 300 ducks so far.

“We get little fish now, 80 percent of the reason is because of the environment,” he said.

Eight 200-horsepower fishing boats from neighboring Island Nan’ao or Fujian Province, use bombs for fishing, he said. When they use this method of fishing, nearly all the fish are killed. Another fisherman, Lu Xiaobing, confirms the appearance of these bombing boats on the sea in May or June. But Lu and Xie’s boats are just 15-horsepower.

Furthermore, 100 boats from Chenghai also fish in the same waters and use electrical current to fish, Xie said. These fishing methods kill all the fish including the small ones therefore depleting much of the fish population.

“And the fishing administrative authority just ignores them even they see what is happening,” he added.

However, Mai Xianshi, the captain of Shantou’s Fishing Administrative Authority said they work to stop illegal fishing boats using electricity or bombs. When they get a tip from anyone including anonymous sources, they take action, he said.

According to Mai, fishermen who do not use electrical current to fish can receive national assistance. However, Xie said most of the fishermen in his village never receive any subvention. In fact, their boats are also illegal because they are not registered in Hukou. The processes for registering their boats are complex and cost them more money than they can afford, he said.

“It can’t be denied that the fishermen are having a hard time, because the fishermen really get less fish. And when we catch the illegal boats, we try to teach them the laws and fine less money,” said the director of the fishing authority.

Zheng, once a fisherman, knows the fishing resources are depleting and that fishermen are having a hard time. That is why, when they catch the small illegal boats, they just fine them without confiscating their boats.

Before, Xie could expect to fish the equivalent of about 1,200 Yuan a day. But that is now rare. A fisherman today gets about 100 Yuan a day, he said. But the costs to make and maintain a boat and the equipment are too high. He made the hull of his boat. He then bought and equipped the engine for about 7,000 Yuan.

“You have to spend more than 10,000 Yuan if you want to make a new fishing boat now.” The fishermen need to spend an additional 15,000 Yuan to buy or change the nets. Besides, every time they go fishing they have to pay 40 Yuan to buy diesel oil.”

Xie Laosan, another fisherman, said, “my best money now is more than 100 Yuan. Sometimes I couldn’t get anything at all.” The most popular fish to catch is the Doufu fish known for its lack of scales and wide mouth ranging from 0.15 kilos to 0.25 kilos in weight.

Yong’an Village has a big industrial estate with many companies. Xie said, “There were two sewage pools behind the Yai Hing Industrial City. And the sewage was black and smelly.”

Yai Hing company is a factory specialized in the electroplating process to make jewelry. Two security guards forbade access to the factory and said they risked their jobs if they did not intimidate newcomers.

According to the Shantou Environmental Protection Agency, Yai Ching was one of the 64 enterprises that had reached pollution emission standards in 2006. A worker at the monitoring department of the EPA, who refused to give his name, said the company probably met the standards. But, he added, his department was not well equipped and he was not sure about the quality of Xinjin River.

Chen Xichuan’s job is to deal with polluted water of Shantou Sez Wingluen Wear Dyeing Factory. He said, “The polluted water has arrived the pollution emission standards. Since 1999, I have been doing this. Our company’s product aims at exporting to western countries and our customers care about the environment very much. On Mar. 27, a HK customer arrived at the factory to check whether our company deserves to place orders or not.”

In the Yong’an Village Neighborhood Committee, four men played cards on two separate occasions. They would not facilitate a meeting with their director to ask about Xinjin River and were unwilling to answer questions.

Construction companies working on sites near the river often pour cement directly into the river according to witnesses including one employee of a cement factory.

The former fisherman’s wife does not see the problem with residential areas dumping their sewage directly into the river.

Pang slaughters the ducks she and her husband raise after customers come to select the one they want to buy. She then pours the dirty water into the river.

She says the river is clean.