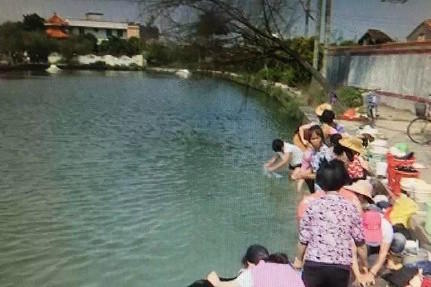 He would put on the plastic boots, roll up his trousers and finally cover his nose with his hands when stepping out of his small home to go for a walk early in the morning.

Qiu Tongzhi, 68, has been living in No.4 of Lane 3, Xia Ling Street, Wu Qiao Island for six decades. For more than two years no government employees have come to clear the sewage drains, he said. Instead the local residents hired plumbers themselves.

“It is too smelly,” he complained, “The upwelling water underneath the blocked sewers get about a foot deep on the ground, every 3rd and 18th day (of the lunar calendar) from August to October when the tide comes in.”

Tongzhi also said that the situation was made worse every time heavy rains arrive. Most low-lying regions in Shantou including Wu Qiao Island, Little Park and Apricot Blossom Street are inundated with water spilling out of the overburden sewers.

“Our store was flooded six inches deep as rain drops mixed with water under the drains after torrential rains,” Hong said, the wife of the owner of Zheng Tai Store which sells dried seafood in Little Park. “Not until the rain stopped could we restart our enterprise after we swept and mopped the dirty floor.”

Some schools like Yu Huai Middle School suffer from a similar predicament. Students have had to remove their shoes and roll up their trousers while walking towards the classroom building through the schoolyard.

Traffic problems, in particular, worsen in such situation.

Accumulated water provides more resistance to any forms of transportation and brings additional difficulties in traffic. Both vehicle and people can be seen being caught in the rain and wind.

A motorcycle taxi driver, Zhang Anran, who lives in Apricot Blossom Street one of the most frequently flooded district complained in his Hubei accent, “The depth of accumulated water that reached my legs stopped me from carrying passengers and fewer people came out.”

However, Hou Guang, who was once working in police station of Apricot Blossom Street and is now part of a group called the Zone Defense Members w, said safety threats matter a lot.

Every year different buildings in Xin Xiang Village near Apricot Blossom Bridge collapse following the heavy rainstorm because the accumulated floods resulting from the overburden sewers weakened the foundations and walls.

“We are organized to rescue more than twenty of the old, the little children and the bedridden patients from the danger,” said Hou Guang.

Because Shantou is located at the mouth of three rivers Hanjiang River, Rongjiang River and Lianjiang River，most drains lower than the sea level are blocked easily with the tidal backwater, according to Cai Huiyuan, 31, the Townscape Deputy Section Chief of City Management Bureau in Shantou.

Huiyuan said aged and damaged drainpipes too small in diameter contribute much to sewage blockage. Furthermore, sludge and discharge of rubbish like boxes and plastic bags also clog the drains.

Part of road construction reform including sewers reconstruction in Huang Shan Road, Zhu Jiang Road and San Jiao Guan Valley has finished, which reduces the certain tension on drains. The reconstruction included installing water mains designed to cut off polluted waste from sewage, and six high-pressure pump stations used to drain water forcibly with one of which in Apricot Blossom Street.

The survey of public intentions in Wu Qiao Island of removal and rebuilding the region the most low-lying area into a big market is under way since 2008, with the purpose of economic development and a solution to drains.

“Actually, the lack of money of the government is the root of drains problem,” said Zheng Junran, 31, the Assistant Engineer of Municipal Engineering Service Centre in Shantou.

There are only less than thirty female workers of Municipal Engineering Service Centre from the first drain cleaning line, dealing with the blocked sewers all over the city from Monday to Friday.

“About thirty civilians next week will be hired to help the government cleaners,” said Tan Dingjie, 40, the Subsection Chief of Manufacturing Technique of Municipal Engineering Service Centre. “We need more, both cleaners and new sewers, but funds shortage still gets in the way.”

“There is still a long way to go,” he added, “More money will be better to support our government to solve drains problem.”