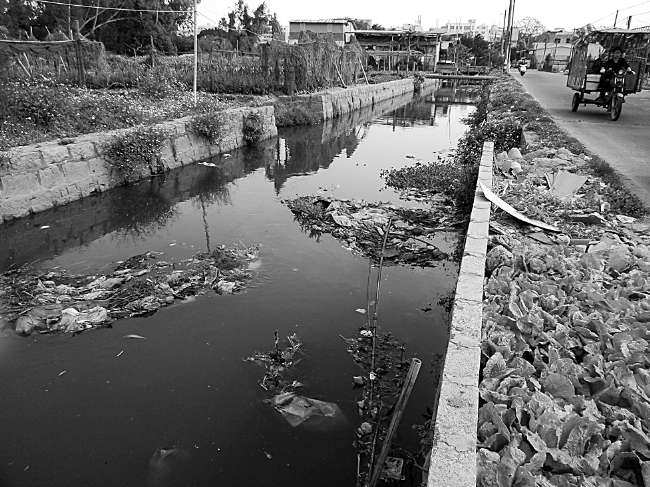 A little boy was playing delightedly near the water lock. “Go away, it’s so dangerous,” shouted an old man. As the wind blew, the deep water in Niu Tianyang flowed rapidly creating a loud sound. The water lock links to the sea and anyone in its waters risks being carried out to sea.

“There are many factories around Niu Tianyang, such as the medicine factory, alcohol factory, food factory and so on. The clean water has been polluted by their waste water,” said Liu Liangqing, a security guard of Niu Tianyang military area.

According to Liu, people here feed saltwater fish, shrimp and crab. Most of the aquaculture in Niu Tianyang is done by people who lease the land from the military in charge of the area.

“The water of Niu Tianyang comes from the ocean, there are nearly seven big water locks, they will bring in the water during high tide and lead the water out during low tide,” he said.

Although the water is pumped in and out with the tide, nobody can ensure a great deal of clean water, he said.

Lin Huanchao, an employee of a pharmaceutical company, called Sea Area Aquaculture Company, said the wastewater from the factory goes directly into the river.

The dirty water affects the harvest of the aquatic products and the culturist’s income. The fish and crab either die prematurely or do not grow well. Some of the farmers tried to put disinfectants into the pond, but it didn’t work.

Lin Guanwang has been engaged in feeding fresh fish for two years using the water from river of Tuo Ji He. A few years ago, while the river had clean water, he had a big harvest, but now the polluted water has a bad smell and a different color than the normal water and his harvest gets infected, he said.

“You can see that there are a few factories around here,” Lin said pointing to a big building far away. “Others who run the sea water culture are much luckier than me, because they use the sea water, it’s better than the Tuo Ji He.”

Though he bought the disinfectant, which is used to clean the water of the pond, it doesn’t work.

“The government knows about the conditions, but they didn’t take any actions to help us, they didn’t care at all,” he said.

Besides the fishermen, the fruit growers also complain about the water quality of the river.

“As usual, we lead the water of Tuo JI He to irrigate the garden tree. Though the fruit guava has a fresh green color, it doesn’t taste very fragrant and sweet, nearly tasteless, but I don’t know what to do,” said Liu DaMo, a garden owner in Niu Tianyang.

But Zhuang Xiao who is the officer of information department in the Environmental Protection Agency of Shan Tou, said they had taken charge in the water pollution of river and canal.

In 2007 they received a notice on the pollution of Tuo Ji river. They appointed workers to investigate and found the pollution was from wastewater poured by factories and sewage from residential areas. According to him, “we have taken actions to deal with the rivers and canals”.

A new law on water pollution prevention and control was put in practice in June 1st last year. Factories that pour wastewater would be fined, he said.

Niu Tianyang is located in the western part of Shan Tou along the South China Sea, Rong Jiang and Lian Jiang River. Decades ago people turned the beach into farmland in Niu Tianyang.

However after a heavy tsunami in 1969 and small harvests, people decided to turn the field into ponds for aquaculture, an area of 26,000 mu.