In the Wal-Mart of Nanguo Shopping Mall, carts were filled with commodities. But they were being pushed towards the warehouse instead of the checkout counters, and by staff instead of customers. A bulletin posted at the entrance of the store illustrated what was happening, “Wal-Mart will close on the expiration date of its contract — December 7th, 2015.” Several days before its official closure, most goods were unavailable at the store. 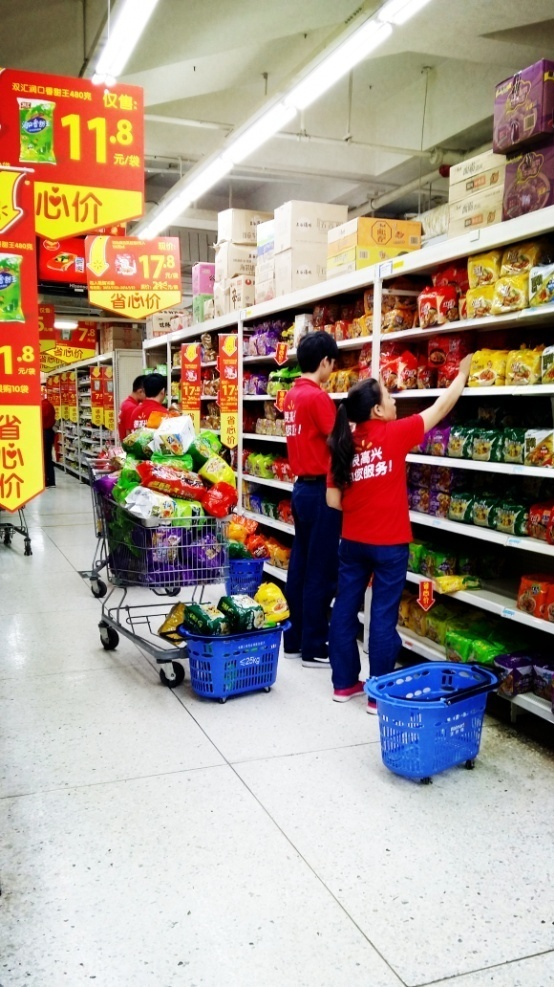 The staff was taking an account of inventory and removing it from the shelves. Photo: Well Tan

With the closure of the Wal-Mart, Nanguo Shopping Mall, which has been in Shantou for 15 years, is about to end its mission. China Resources Land Limited, a development company, spent 1.57 billion RMB on the land and is going to build a new urban complex, MIXC, on the original site to replace Nanguo Shopping Mall.

Nanguo Shopping Mall was the first modern shopping center in Shantou, as well as the biggest one in eastern Guangdong Province. It opened in 2000 and introduced a number of well-known shops such as Wal-Mart, Parkson, Mc Donald’a and KFC. In the past fifteen years, Nanguo Shopping Mall has been one of the busiest and most popular leisure site in Shantou; over a thousand performances and activities were held in it, according to E-Jing Net.

In 2012, China Resources Land Limited (CRL) made an agreement with the Shantou government to tear down Nanguo Shopping Mall in order to build a new MIXC. CRL, a Hong Kong property developer whose business covers over 20 cities in China, builds complexes offering residences, offices, shopping and entertainment in one location. In Shenzhen, the MIXC is located in a busy district, Luohu district, near Diwang Mansion, one of the most famous landmarks in Shenzhen.

Will Wal-Mart re-open in the new complex? “Nothing has been decided yet,” said Huang Sanshan, the manager of Cost Control Department of Shantou Huarun Estate Development Co., Ltd, the Shantou branch of CRL. But according to THEMIXC.COM, MIXC has its own supermarket brand — Ole’ Supermarket, which specializes in the imported goods. Up to 2014, thirty Ole’ Supermarkets have been open in different MIXCs respectively, according to Ole’ online shopping mall.

On May 28th, 2014, CRL made a 1.57 billion yuan deal with the Shantou Municipal Bureau of Urban and Rural Planning to turn the former Nanguo center and area adjacent to it into the new development. The total area of the land is .11 square kilometers according to No.019 Construction Land Use Permit issued by the bureau, roughly one city block of downtown Shantou.

In June of 2014, CRL took over the land and property management of Nanguo Shopping Mall and asked shopkeepers, who had no long-term contracts with the mall, to move out before September 30th.

On September 15th, 2014, CRL started to lay the cornerstones at the area behind Nanguo Shopping Mall, which was their first step to rebuild this area, according to Shantou government official website. At the same time, several parts of Nanguo Shopping Mall were surrounded with scaffolds and prepared to be dismantled, such as the well-known landmark — the blue ball at the top of the mall.At the end of last year, most shopkeepers had moved out. Only stores who had signed a long-term contract with the former shopping mall manager remained.

On May, 2015, KFC and Parkson moved out. And soon on December 7th, 2015, Wal-Mart is going to leave. Only Music Online KTV and Yifan Cinema still stay in Nanguo Shopping Mall.

When will the last two stores leave? There are no exact dates.

The staff of Yifan Cinema, Yao Xun, said, “There are still eight years left on the contract, and we have not been informed the exact date of leaving by CRL yet.” Yifan Cinema and CRL are in the process of negotiation, according to Yao.

Another remainder is Music Online KTV. The receptionist of the KTV, Guo Ni, said, “At the beginning of November, the staff of CRL came here and measured the usable area of the KTV for some purposes, but my boss did not tell us any information about leaving.”

For many Shantou citizens born in 1990s, Nanguo Shopping Mall was regarded as one of the most meaningful landmarks in Shantou.

Zhao Xiaoyun, a high school student, said, “I often browsed here and purchased some necessities in Wal-Mart. Nanguo Shopping Mall is somehow like a precious memory to me, but I am also looking forward to the MIXC.”

MIXC is expected to open in 2018, according to the CRL. Shantou government assumed that the new MIXC will contribute approximately 250 million yuan for taxation and provide over 5,000 jobss, according to its official website. Xu Kai, the vice mayor in Shantou, said in the cornerstone laying ceremony, “MIXC is of great importance for Shantou to enhance the development of a modern service industry as well as to promote the city quality.”

On a more popular level, some waxed nostalgic about the departure of the old Nanguo shopping center.

A Chaoshan rapper, Wang Wei composed a piece of music and made a music video to commemorate the period people spent in Nanguo Shopping Mall. The lyrics went along with a steady beat, “When I walk along Jinhuan and Changping roads, I have a look at Nanguo Shopping Mall several times. Before long, it will become our memory, and disappear from our life……”