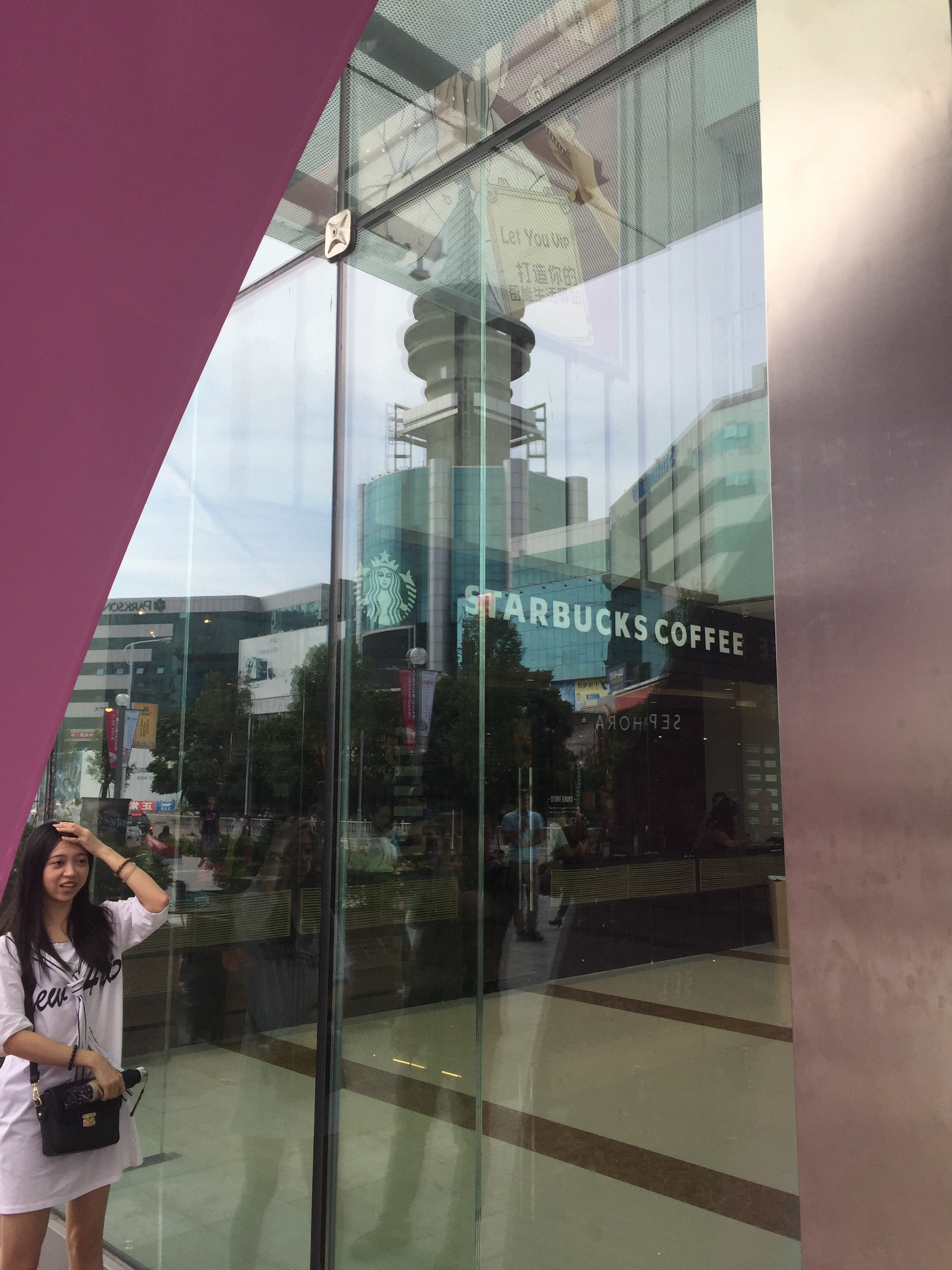 A woman stands outside of Suning Starbucks, with the reflection of “Old Walmart,” the Nanguo Shangcheng mall, reflected in the window. Photo: MyShantou.net

On an afternoon in October, 67 customers lined up at Starbucks over a half an hour period. “Mr Chen, your coffee is ready,” said a staff member behind the counter. Hearing this, a 22-year-old man with a red-checked shirt took his cappuccino from the staff member, sat on the stool, and took out his phone to take a picture of his coffee. 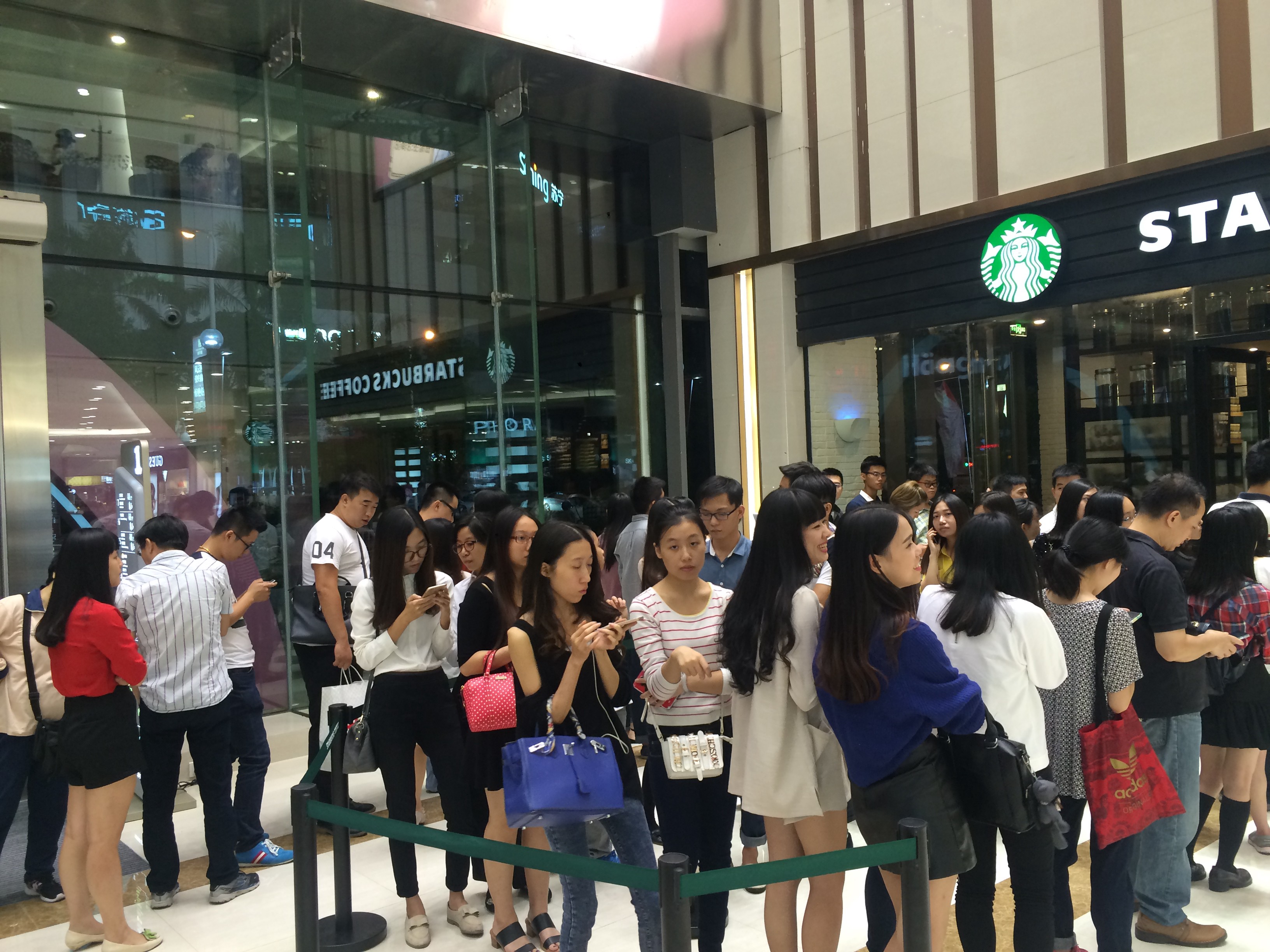 On September 30th 2015, the first Starbucks in eastern Guangdong opened in Suning Plaza, Shantou. The second, in Xinghucheng Mall — often referred to as the “new Walmart” mall by English speakers — opened a few days before Christmas. Five more Starbucks (including the one just mentioned) will be established within half a year in Shantou, according to Tang Qi Yang, a trading partner Starbucks for southeastern China. On the morning of October 16th, Starbucks held a formal opening ceremony for the Suning branch. “The first Starbucks in Shantou has opened,” Starbucks Marketing Director of Southern China, Zhang Jun said. 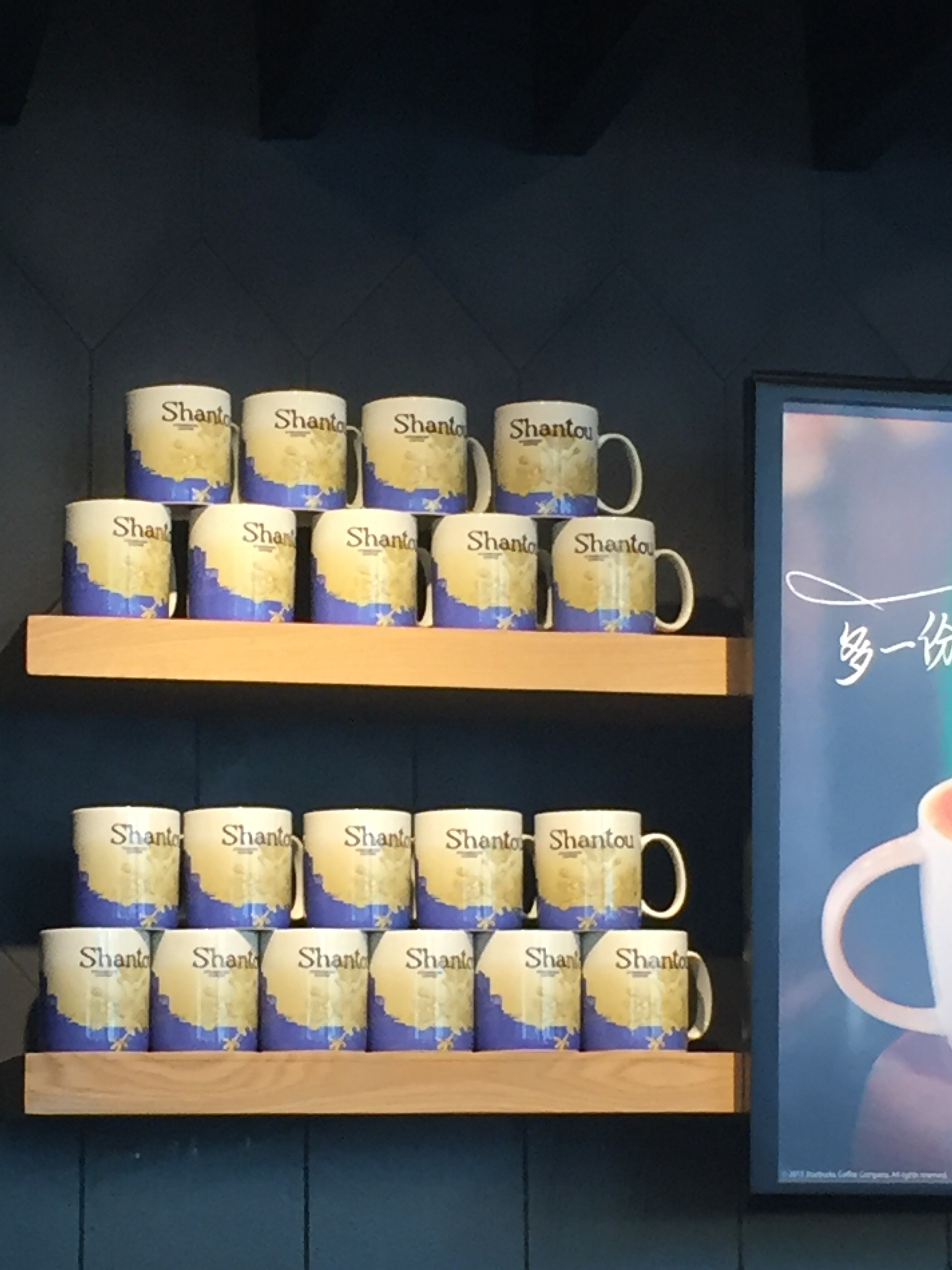 Four other locations Starbucks locations are planned in Shantou, according to Starbucks workers and mid-level management. The third branch will open at the end of December at Bu Feng Center, a recently opened mall with a Lotus supermarket in the north central section of Shantou. Other outlets are likely to be in similar malls, but precise locations and timelines are not yet clear.

Founded in 1971, Starbucks has entered 62 Chinese cities since the first one in mainland China opened in Beijing in 1999. Most sources put the number of Starbucks in China between 1,500 and 1,700 — the Chinese market was poised to become Starbucks second largest outside of the U.S., according to a 2013 USA Today story. 16 years after the Beijing branch opened, Shantou has joined the list of Chinese locations. The attitudes of the customers about Starbucks in Shantou vary widely, from people who genuinely like the coffee, to those who go there to show off.

Wang Di, the shop manager of Starbucks in Suning, used to be the manager in Shenzhen Starbucks. He said that the economic factor is one of the reasons why Starbucks opened relatively late in Shantou.

“Starbucks is a direct-sale company which has its own standards to choose cities,” he said, referring to the fact that Starbucks maintains control over all of their branches. “Before Suning Plaza, it was difficult to find a block in Shantou which includes consumption, entertainment and finance all together,” he said.

Now, Suning Starbucks has 31 staff members; 11 are experienced staff members from other cities who came to Shantou to do on-the-job training for new staff members.

Starbucks not only allocates staff and material to every branch directly but also decides where to open a new branch to make sure all Starbucks have the same standard. A 33-year-old salesman from Hubei province, Zheng Rui said he had to tried to strike a deal with Starbucks and introduce it to Shantou in 2005 and failed to because of these standards.

With the constant lines outside the door in its first month of being open, the popularity of Shantou Starbucks stood out — to the surprise of some.

“I have never seen a Starbucks so busy for so long and I am a little surprised that local people know a lot about Starbucks,” said Wang Di. He also mentioned that there was a student who bought coffee three times a day.

A staff member of Bank of China, Xue Zhanpeng, 29, explained people come to Starbucks because it’s fashionable. More and more people work and study in others cities so local Chaoshan people have already become familiar with Starbucks, he said.

“And some of them can afford a 30-yuan drink,” he said. The price for a tall American coffee in the U.S. runs about two dollars; the same drink in China is roughly between 25–30 RMB, or four or over four U.S. dollars.

Some young people came to Starbucks and took pictures with the products or the logo of Starbucks. They posted the pictures on Wechat and shared them with their friends. There were also some middle-aged people and older people drinking coffee, eating bread and talking with their friends. 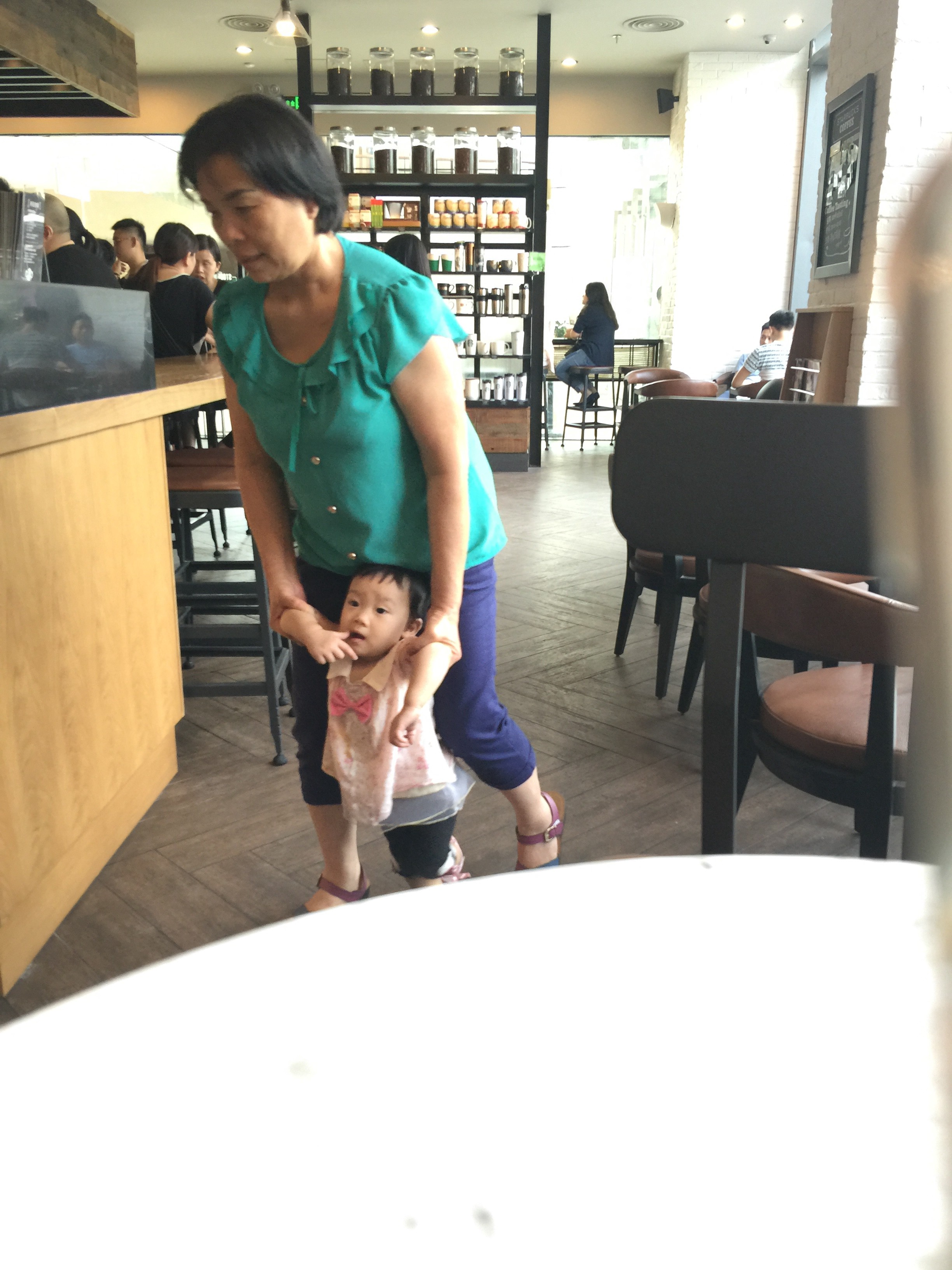 A customer with a small child at Suning Starbucks. Photo: Wency Lin

Sitting at the bar stool in the corner, Cai Xiaodong, a 24-year-old designer of toys, took out his Apple laptop, looked around and started talking with his friend. He used his iPhone to take photos for his friend with the coffee.

“Actually I am ‘Zhuangbi’,” Cai said, using Chinese slang to describe showing off in public. 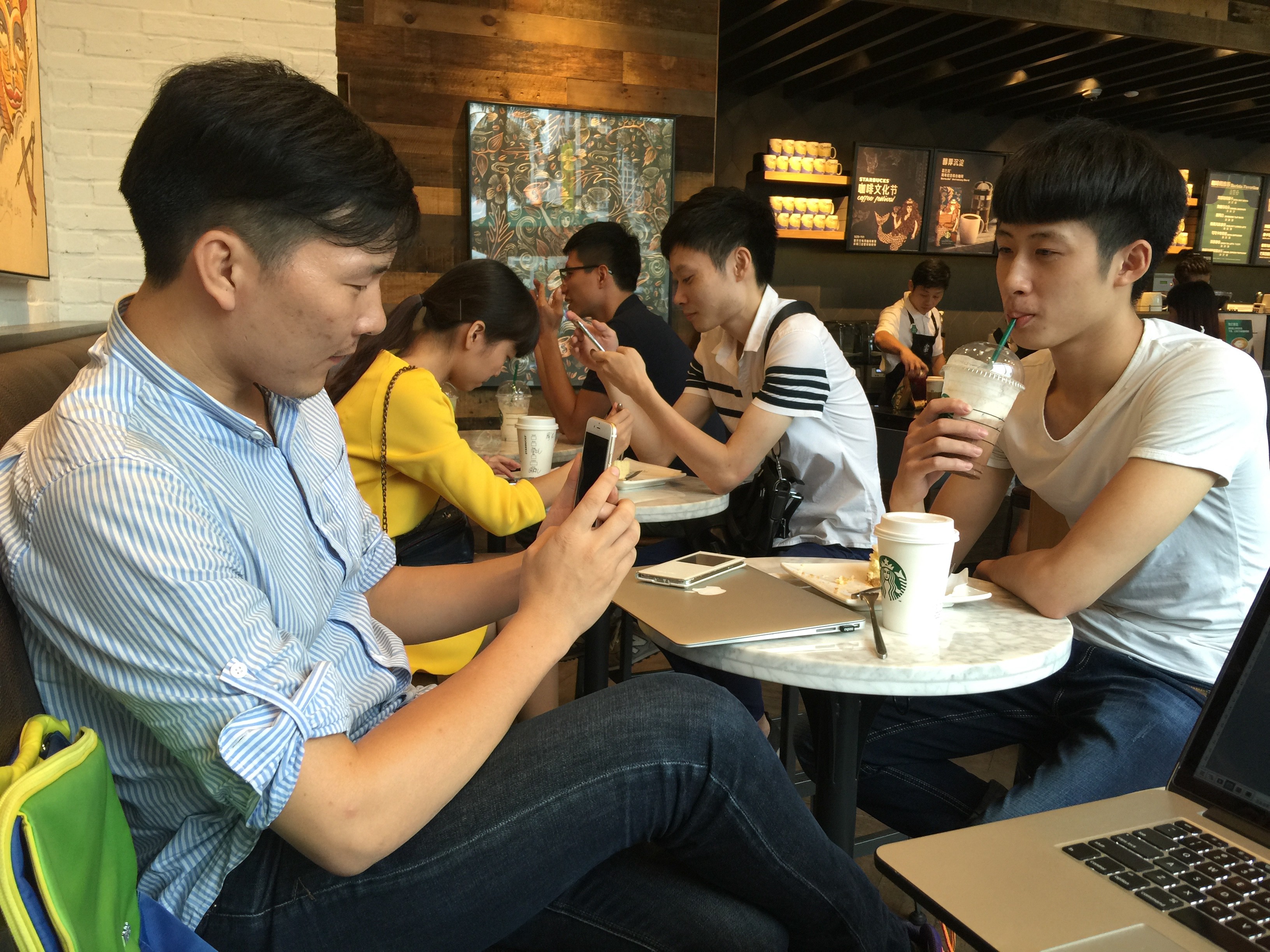 Cai Xiaodong, seated on the left, takes a photo of his friend at Starbucks. Photo: Wency Lin

Others had not-so-stunning reviews of the coffee. Mrs. Zhang, a full-time housewife, came to Starbucks with her friend for the first time and she thought the coffee was not so great. “This is mocha but it tastes like dishwater,” she said, “Also it is a little expensive.”