Half way up the Sang Pu Mountain, the silence in the humid air was broken by a blast of drilling. With a drilling tool that was almost half of his height, a middle-aged straw-hat-wearing man was trying to make a hole in a rock and break it into two. Around him stood another five or six men, each wielding construction tools, either digging into the sand or moving the stones. The area they had cleared was approximately as big as half a tennis court. On one side of it there was already a Chaoshan traditional style grave; on the other, a new one was seemingly under construction. 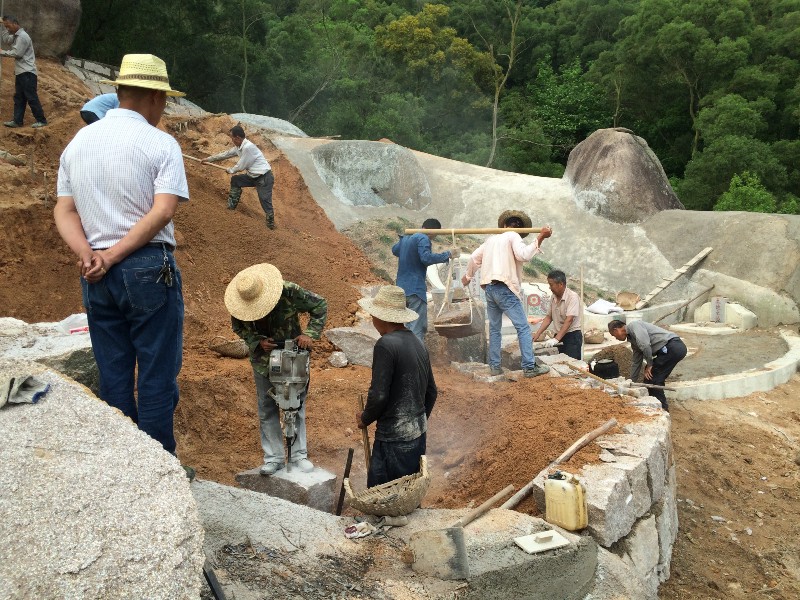 Such scenes were familiar to the local administrator taking charge of this area. According to Chen Yu, a section member of Tuo Jiang Subdistrict Office and also an MBA student of Shantou University, hundreds of new graves have been built in the Sang Pu mountains over the past few decades, although it was deemed illegal by authorities, and various methods have been used to curb the practice. The mountains, which stretch across the boundaries of Shantou, Chaozhou, and Jieyang, have become a major site of ancestors-worshiping on Qing Ming Festival. However, the building of new graves have also given rise to environmental concerns, as trees near the grave will be clear-cut to make space for the construction. According to Xu Zhenshi, an expert working for Shantou Bureau of Geology, that practice contributes to the threat of landslides.

Also, even when regulations are followed and bodies are cremated rather than buried, graves sometimes are still created, according to a report — by relatives who give the ashes a “second burial.”

Mr. Lin, one of the directors of Tuo Jiang Subdistrict Office and in charge of civil affairs, expressed his frustration with the continued construction in protected areas. “Those graves on the Sang Pu mountains are driving us crazy,” said Lin. “Regulations have been made, but whether people will follow them is another story — especially the villagers.”

Nongmin Road, a road between the Sang Pu Mountain and Shantou University, is a narrow track running at the foot of the mountains. As Chen Zhongzhi, a man with a small shack on the road, remembered every Qing Ming Festival, it would be crowded with cars as people visit their ancestors’ graves on the mountain. He has been farming at the foot of the mountain for more than twenty years, and he could quite frequently see people building graves on the mountain. “This whole mountain is available for building graves. If you are a resident of the nearby area, and you find it suitable, you can build a grave here,” said Chen. 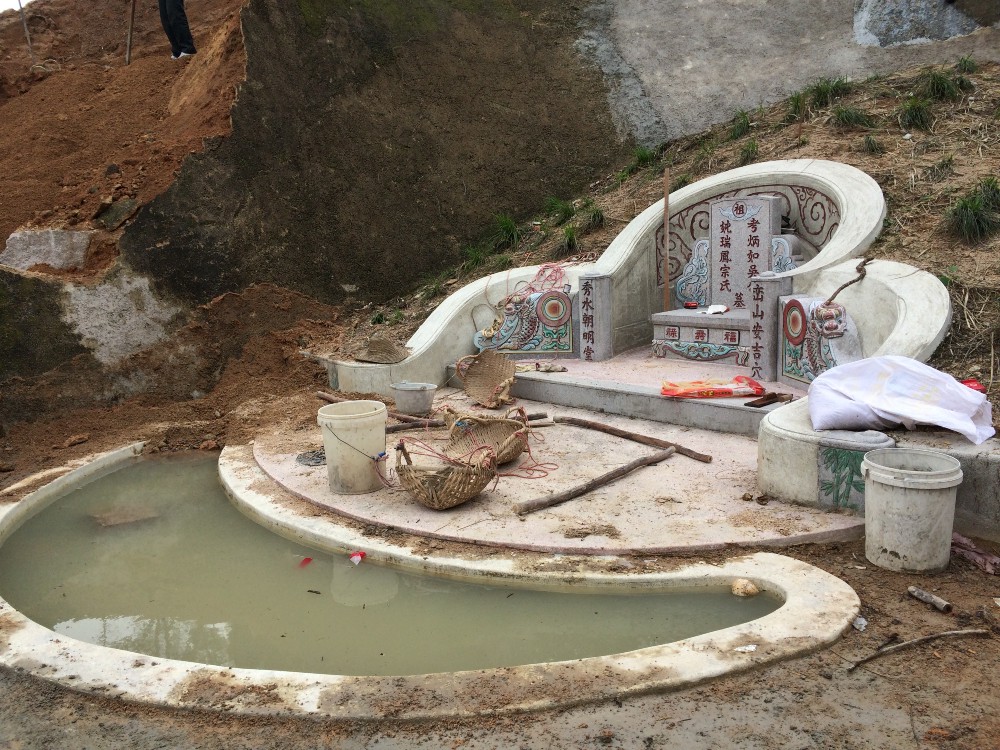 Image: Recently built grave in the Sangpu Shan area. The size of the land area cleared for a common grave is, perhaps, five to ten times that used for graves in cemeteries. Photo: Huang Peidan

The building of graves is of particular importance in Chaoshan funeral and interment rituals. An article on the Shantou University Chaoshan Special Collection website explains that building graves is also called Zuo Feng Shui (做风水, literally, making wind-water) in the Chaoshan area. Fengshui is a Chinese philosophical system of people placing structures and building structures in the proper relation to the environment, and it has been widely embraced in Chaoshan area. According to the article, before building a grave, a feng shui master will be hired to decide whether a place has good feng shui, and only after that will they start the building; it is commonly believed that the Sangpu Shan — with high hills, streams, a reservoir at their foot, and breezes reaching in from the coast — have good feng shui. The feng shui status of ancestors’ graves are believed to be able to influence their descendants’ luck, so people planning to build a grave for themselves or their relatives will pay special attention to locations.

What’s more, in a published paper reflecting on these rituals, the author Chen Qishen stated that there is a concept underlying all the funeral and interment rituals — the notion of Ru Tu Wei An (入土为安). In other words, according to Chinese traditions, the deceased can only rest in peace when they are buried in the ground; because of the long tradition of this notion, burial in the ground is prevalent in Shantou. According to statistics shown on the website of Shantou Civil Affairs Bureau, as of 1997, there were about 500,000 graves in Shantou — taking up more than ten square kilometers of land. From 1992 to 1997, 56,800 new graves were built in the city. In 1997, a new regulation requiring cremation came into effect — in part to protect land resources.

Wu Chufen, a resident of Tuopu, says that all of the graves of her ancestors are in the Sang Pu mountains. Most of them have been there since quite a long time ago, but some of them were built in the past decade. “Those lands belong to our village. We can build graves on it if we want to,” said Wu, a women in her fifties. 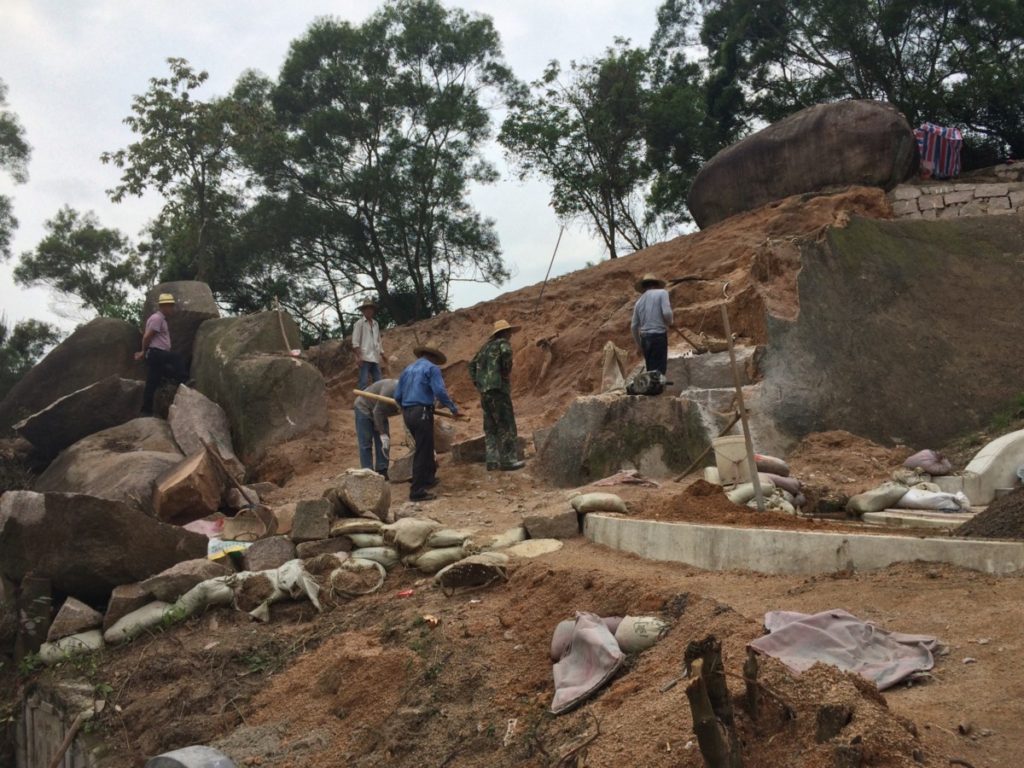 Wu’s statement contradicts official regulations. In 1997, the Shantou government issued a control regulation on funeral and interment, and it was later revised in 2004. The regulation stipulated that all dead bodies have to be cremated, and burial in the ground is strictly prohibited. Five years after the regulation’s implementation, according to a report published in the Nanfang Daily, the cremation rate in Shantou had risen drastically.

However, the rise of the cremation rate may not necessarily result in the fading of burial in the ground, as was pointed out by the Xinhua reporter Xiao Sisi. In her article “Second Time Burial in the Ground in the Countryside,” she mentioned that it was still common for people in Shantou to build graves and bury the ashes of the deceased into the ground.

An announcement made by the Shantou Civil Affairs Bureau in 2001 specifically mentioned the act of Hui Lin Zao Fen, namely to destroy a patch of forest to build graves. It was said to be “strictly prohibited,” and the graves will be demolished and removed once they are found out. According to Chen Yu, the section member of Tuo Jiang subdistrict office, the Sangpu mountains are publicly owned land. Therefore, it is not allowed to build any permanent structures, including graves, on it, he said.

To protect the mountain from being damaged by the building of graves, a group of administrative law enforcement officials called the “Detachment of Funeral and Interment Reform” will go on patrol on the mountain twice a week. If any grave-building is discovered by these officials, the offenders will be stopped and asked to replant trees, said Mr. Lin, the Subdistrict Office director. In addition to that, the whole mountain area has been divided into different divisions, each administered by different neighborhood committees; these committees are responsible for hiring people to patrol in their divisions everyday to ensure that no new graves are being built, according to Mr. Lin. What’s more, according to Xu Zhenshi, the geography expert working for the Land Use Management Section of Shantou Bureau of Geology, the Bureau of Geology of Guangdong Province will take aerial photo of the whole province twice a year, and these photos will be used to spot illegal uses of land.

However, doubts exist over whether those regulations and enforcement of them work effectively in practice. “Those leaders are also locals, how could they possibly remove the others’ ancestors’ graves? Even they themselves want their ancestors to be buried in graves on the mountain,”said Lin Jun, a student of Shantou University Medical College and also a resident of Tuopu who has a long-standing interest in the graves in the Sangpu mountains. “To be honest, there are only two types of people will be buried in a cemetery: the Christian and the poor.”

A number of historical factors complicate who controls land like the Sangpu Shan area, and how the land there is used. According to Chen Yu, the local official, the ownership of the land on the Sang Pu Mountain was quite blurry in the past. Many of the villagers thought that the lands belonged to their villages, and therefore it was perfectly reasonable for them to build graves on the mountain. What’s more, the long history of this practice was also thought to be able to justify the practice itself. “We have been doing that for hundreds of years. All of our ancestors are buried on the mountain. Now, how could you say those are publicly owned lands — and then stop us from doing that any more?” said Wu Chufen, the Tuopu village resident. 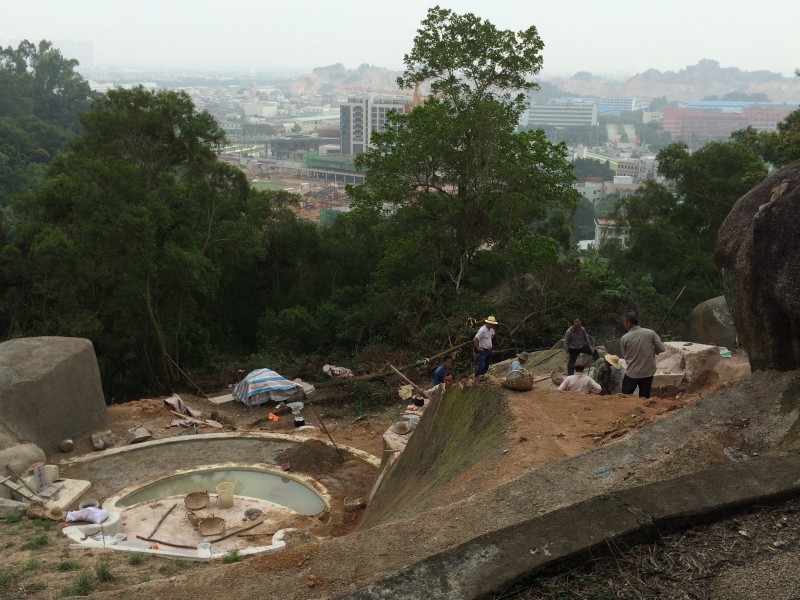 A view of graves under construction with cut trees in the middle background. In the far background, construction of Guangdong Technion is underway. Photo: Liang Yaoxiang

The possibility of danger posed by the practice of destroying forests to build could be seen by many, including the local officials overseeing this area. Xu Zhenshi, the geography expert pointed to the danger of landslides. “It could cause the potential threat of landslides, that’s for sure,” said Xu. “And what’s more, I could totally see the Sangpu mountains becoming covered with graves if things continue to go like this.”