The woman sang and raised her arms while walking around in a circle outside the temple. In front of her was a small altar with plates of fruits and meat on it. No one could understand her words. People stopped and stared, then went upstairs and went into the entrance of the temple. The woman was not just worshiping but actually being taken over by her object of worship: Matsu, goddess of the sea.

“She is possessed by a god”, Xu Yunxin, 60, chief director of Council of Tianhou Temple said. 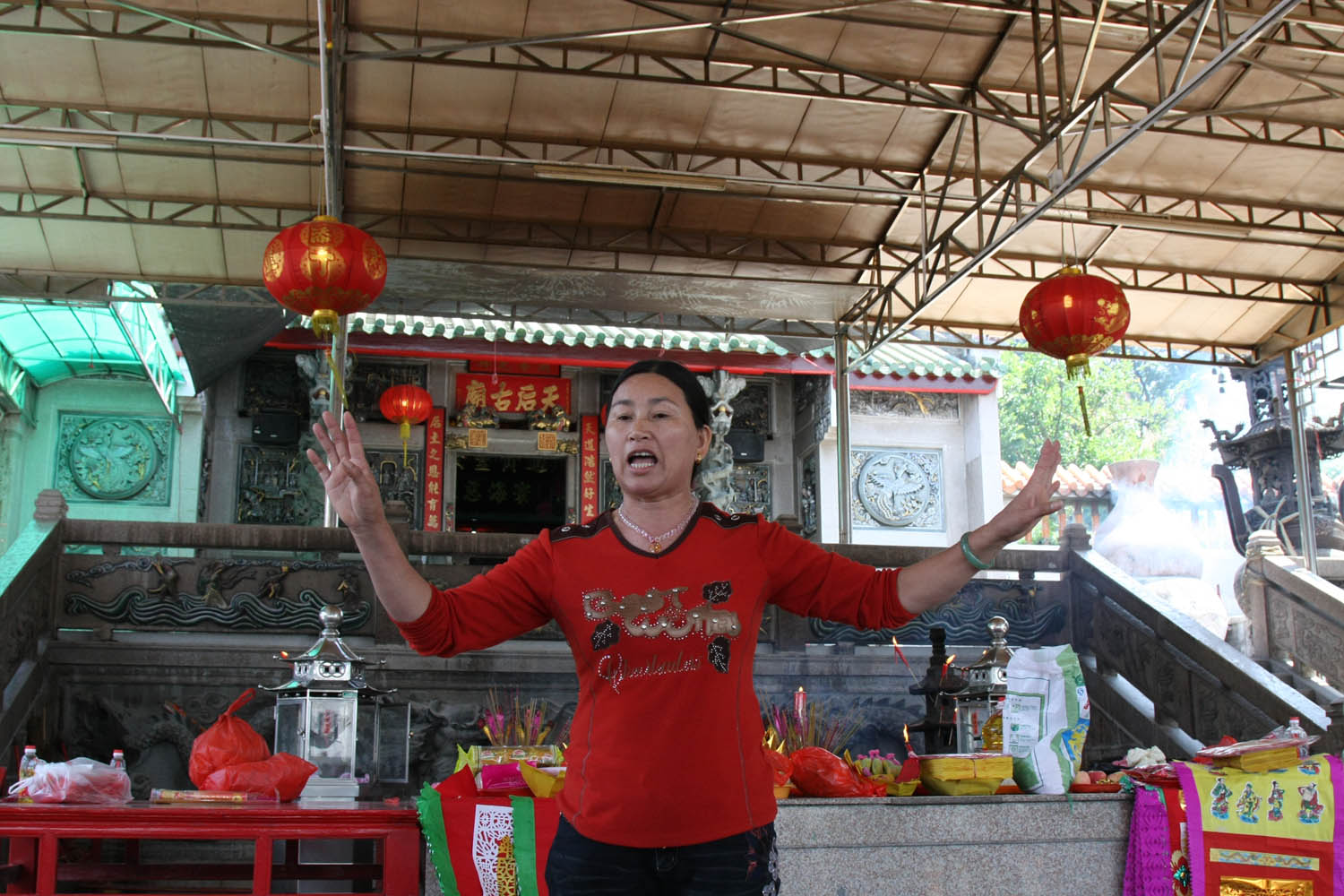 Having worked in the temple council since 2006, Xu has met many people like the unknown woman. Xu said that the worshipping woman was not unique; followers of Matsu come and visit their god regularly.

The deity the woman had come for is Matsu, a goddess who protects people who live on the coastal areas of China from the disasters of the sea.

According to legend, Matsu is an indigenous goddess of the sea who protects fishermen and sailors associated with the ocean. With her mortal name “Lin Moniang”, Matsu was born without crying and thus got a given name – “moniang” – which means “Silent Girl.”

Stories surround Lin Moniang and her transformation into the goddess Matsu. Moniang’s father and brother were both fishermen. One day, a terrible storm attacked them as they went out to fish. Moniang and her mother were staying at home and praying for the two at sea. Suddenly Moniang fell into a trance and saw her drowning father and brother in the dream. Her mother woke her up without noticing she was diverting Moniang’s attention, causing the death of her son. However, her father returned alive miraculously.

Over time, the legend of Lin Moniang transformed into stories of the goddess Matsu. “Ma” here didn’t mean mother but grandmother in Chinese. “Tsu” meant ancestor. People put “Ma” and “Tsu” together ,regarding it as a deferential form of address to women advanced in years and highly esteemed.

Now, coastal residents in China living a traditional sea-faring life worship the sea goddess as a deity who can help those at sea and living near the sea.

On a small land lying at the mouth of the Hanjiang River in the sea off Shantou coast, there is an island called Mayu; its main village has only about 1000 residents, but they are all followers of Matsu. The small island has eight temples devoted to sea gods. Among them the biggest temple, Tianhou, is devoted to Matsu.

Villagers like the woman full of the spirit of Matsu can worship in ways as simple as what they usually eat. Fish, pork and fruits like apples are often put on the altar, behind which is a 1.5-meter-high clothed statues of Mastu.

Residents come to the Matsu temple to pray on the first and the fifteen day of every lunar month. Also on March 23 and September 9, which are the birthday of Matsu and the day she went back to the heaven, more people will come to the small temple. 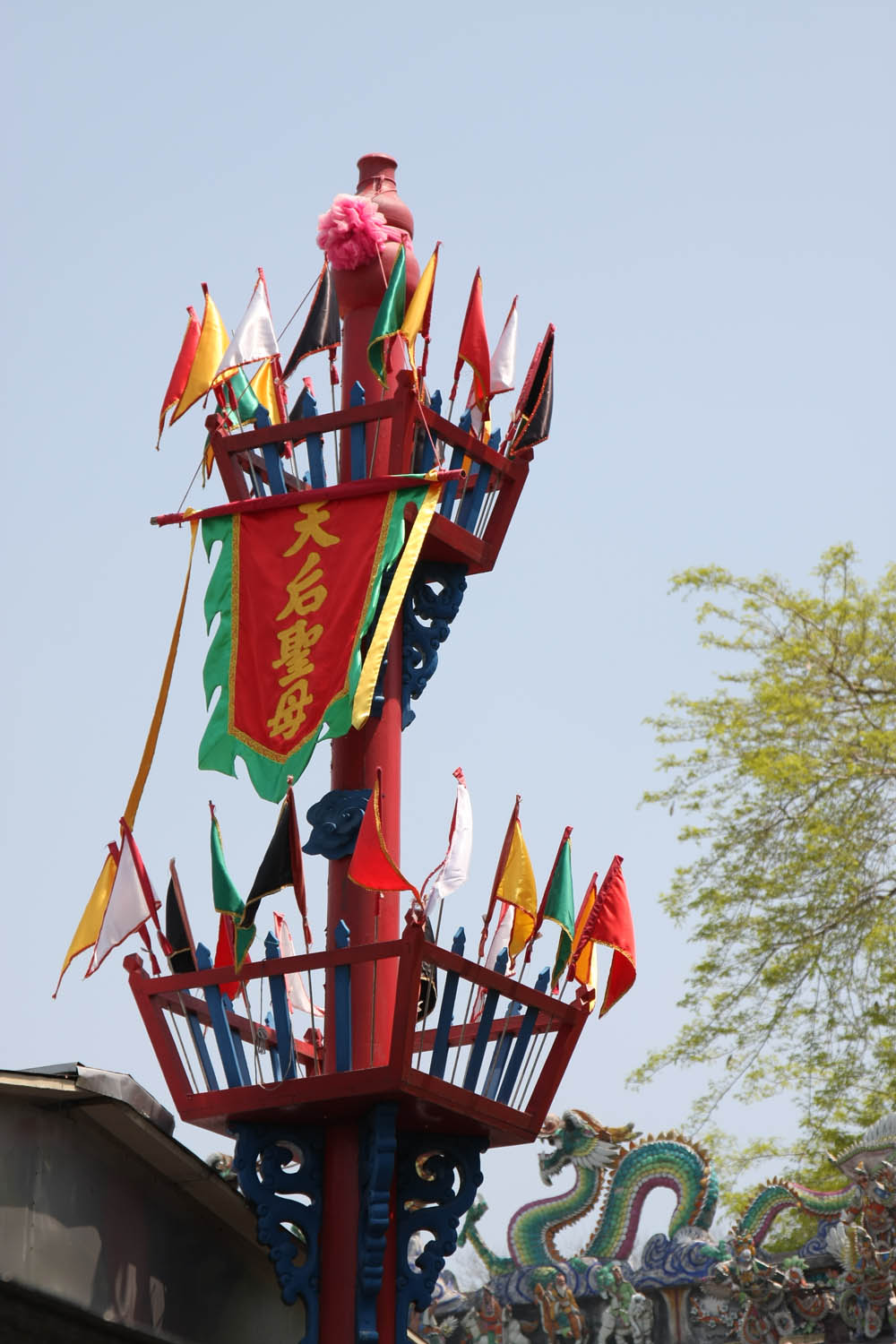 Believers who come to the temple are mainly from Chaoyang, Chenghai, Puning and Chao’an. These Shantou districts form the biggest group of Matsu followers. However, overseas Chinese in Southeast Asia are also a big population believing in Matsu, especially those from Thailand.

Lying on the mountainside, the main temple has several shrines that stretch out on the mountainside below it. Before the entrance of the temple is an incense burner where “ghost money” can be burned for the deceased. The complex roofs are constructed in a traditional Chinese style and include numerous wood carvings, including dragons, lions, as well as sculptures of people.

Ke Kaiping, one of the four members of the Council of Tianhou Temple, emphasized the role played by the maritime trade in developing the Chaoshan area as a center of business. Over the past hundreds of years, as Chaoshan people went overseas, they paid tribute to Matsu. One of the things they must do before departure was to go to the temple and visit Matsu, only after which they could take a big wooden boat and leave. “Matsu is in charge of the sea. They wanted safety through their voyage in the boundless ocean,” Ke said with his arms stretching and made a wide circle. He added that every year when those believers come back, they will come to the temple and show their thanks and respect to Matsu.

Having a history of more than 800 years, Tianhou Temple has been reconstructed countless times. With all religious activities banned during the Cultural Revolution from 1966 to 1976, the Matsu culture here also suffered.

Recalling those period of time, Xu Wenxin said the Red Guard threw the Matsu statue into the sea. They had to put the destroyed temple to use keeping pigs. After the Cultural Revolution, the devoted villagers raised funds to rebuild the temple. It soon got generous support from many oversesas Chinese.

With a monument hanging in front of the building, Tianhou Temple is named a cultural relic by the Shantou government. But some believed it was support in name only. “The government didn’t help us at all!” Xu Yunxin said in a big voice. 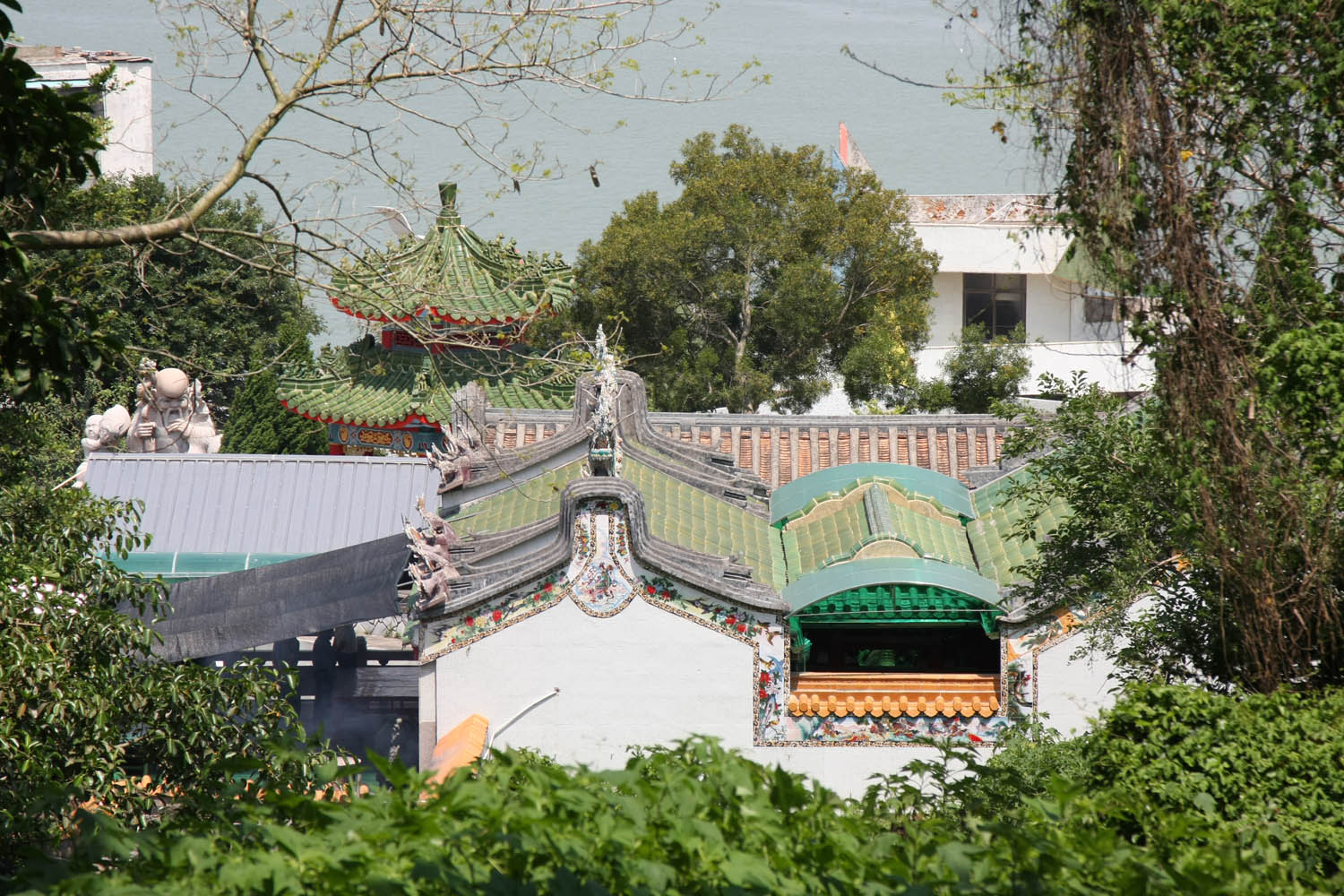 Chen Zhanshan, a professor of Shantou University specializing in Chaoshan culture study, said that from ancient time to present, Chaoshan people have been earning a life by fishing and trading over the sea. “It’s so natural that they need the blessing from the god of the sea,” Chen Zhanshan said.

He added that the culture in Chaoshan area is complicated, with different combinations of culture and belief from other religions. Matsu may have a connection with Buddhism, or Lao Tzu, or even Christianity.

People in Mayu village lead a quiet life of farming work. Ke Kaiping said they have harmony and comfort in their minds, though the place they live in is an isolated small island due to their beliefs. “The whole village worships Matsu and she will protect us forever,” Ke Kaiping said with a big smile.