A man leads the centipede with a golden ball, like a conductor directing an orchestra. Wherever the ball moves, a twenty-two meter long centipede starts to dance. Raising its sharp head, twisting and moving its flexible body forward rapidly, the lifelike myriapod seems as vivid as the real one.

Originating in Ximen town, Centipede Dance is the most famous dance among those special dances in Chenghai district, Shantou, namely Double Dragon Dance and Lobster Dance, which are dubbed by local people as “The aero-amphibious dances”. The Centipede Dance applied for the National Intangible Cultural Heritage in 2004, then finally successfully selected into it in 2008.

The twenty-two-meter long “Centipede”, is made by iron, bamboo and cloth, composed of twelve sections. In the traditional scale, each articular sclerate needs at least five people to hold and manipulate. Besides, there is a group of participants playing gongs and drums. Normally speaking, totally more than a hundred participants needed each time in tradition.

The centipede is  the star of a traditional dance, the Centipede Dance, only performed on special days. 16th, February every leap year is one of the biggest ceremonies. When the traditional “Divinities Contest” is held, the “centipede” will parade along the main street of the town. Whenever and wherever it appears, there will be a big crowd yelling and cheering excitedly.

“We need thirty thousand RMB to make a centipede, not accounting for more than one hundred people’s salary.” Said Chen Xishun, 58-year-old. He is the fifth generation successor of Centipede Dance.

Chen Xishun mentioned that the expensive fee restricts the development of Centipede Dance. Before selected into the National Intangible Cultural Heritage, performances of Centipede Dance depends on villagers’ donation. But luckier than other dance forms, Centipede Dance is now supported by government after successfully selected into the National Intangible Cultural Heritage. Therefore, the dance form can be carried on. However, the financial aid rescues the dying dance form but it’s still far way from carrying forward the tradition.

Cai Zhuoqiang, the officer of Ximen town propaganda department said: “Government’s routine financial aid is not enough to carry on such a big custom. We’re now applying for another financial aid.”

Policy of national culture department tends to support the countryside. Traditional culture or customs like Centipede Dance, which exists in the middle-scale town, is not highly protected. In addition, financial aid is hard to apply according to Cai zhuoqiang.

Meanwhile, despite the financial support, holding a Centipede Dance performance still meets difficulties. The obvious one is lacking new performers willing to devote their time to the craft. As the amateur team, participants mainly are local people. It’s not easy to find enough people for a performance, so teams even recruit children to help out.

“My little kid needs to be the drummer,” Chen Xishun said. Costing huge expense of money and human resource, that’s why normally the dance is performed every four years.

Besides, another common way to protect a culture is to teach the next generation whoever wants to learn. However, Chen Xishun has his own opinion to protect Centipede Dance. Actually, he is strongly against teaching Centipede Dance skills to youth from other places even other districts of Shantou city.

“Those who teach it to people in other place are traitors!” he said.

Having no plan to teach the next generation, Chen Xishun prefers to let whoever wants to play to join in the Centipede Dance performance. Speaking about who will be the nest successor, he laughed and said: “It’s just a pattern. Who plays well who is the next successor.” 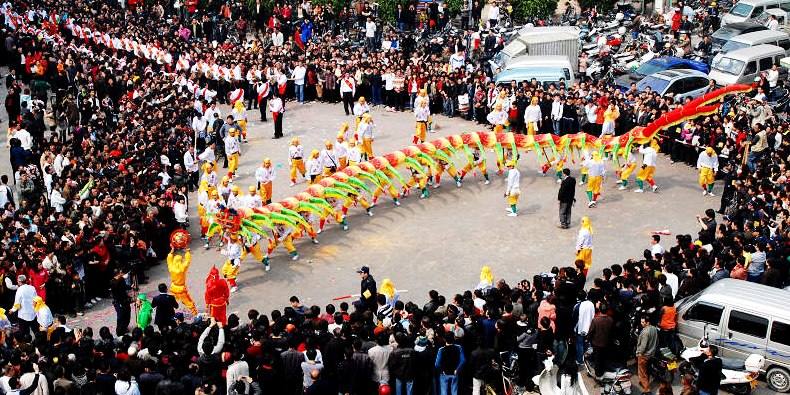 Centipede dance, which is long about twenty-second meters. It is separated for three parts: head, body and tail. The head of the centipede looks like the lion’s head. There is a pair of sharp teeth in both sides of the mouth. Its body is combined by twenty-eight hard and soft clothes, which makes it to move flexibly. And some lamps and candles and fireworks equipment are hung inside its body. The tail is in the shape of scissors. When the Centipede Dance begins to show, one person holds a colorful ball leading way and fifteen persons hiding in the abdomen of the centipede. The fifteen men should stoop and bend the knees and they must use “Ding zi Ma”, “bow step”, “Guan yin zuo lian” (different kinds of horse stances) and other martial art actions to control the big centipede.

As the weight of the centipede is over 100 kg, so it demands the performers should have the basic of martial art.

Centipede dance is one of the excellent dances in Chenghai district. It has a long history, which more than 100 years. And now it’s a famed folk consummate art in Chenghai.

The idea for a centipede dance came from two Chenghai residents in Qing dynasty who saw a centipede creeping and decided it would make a good dance.