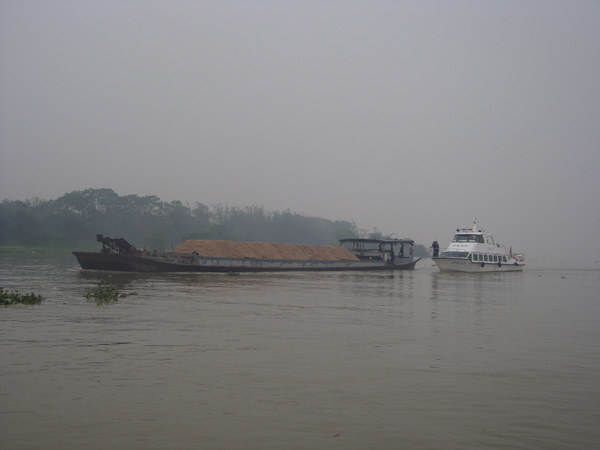 At the junction of Huanghe Road and Jinghuannan Road, the water of the Longhu Canal stands still with litter on its surface.

A little over a year ago, the intense cleaning up of the 7.3 kilometer-long canal was complete.
However, the renovated Longhu Canal is now facing menace. The more visitors it attracts, the more garbage it accumulates.

“Humans always bring pollution,” said Fang Sheng, a resident near Longhu Canal. As one of the residents who lived in the area for over 20 years, he witnessed the time before Longhu Canal was cleaned up.

“It was smelly in the past years, the water was very dirty, and the waterspout was jammed. When it rained, it always brought troubles, like flooding,” he said. “Now it is much better since it has been treated, no smelly wind, and I always come here to wander along the ditch or do exercises.”

Longhu Canal was originally used as an irrigation ditch for farmland. However, as the city expanded so did the number of people living near the canal. More and more apartment and commercial buildings were built. Industry and business also flourished.

According to a Shantou Daily article at the time, the town clerk and city government decided to renovate the ditch in 2003. On December 31, 2003, the repairing work formally began. The main measure was to use the water from Hanjiang River to swell out the polluted water. After four years, in January 2008, the ditch was clean of garbage and sewage. The city government also built other structures like the green belt with road lights and benches, to make the canal more attractive. The project cost over 14.8 million RMB, according to a government website.

Cui Yi, 68, is one of the visitors, came from Shandong province. She came to Shantou to visit her daughter who has been teaching in Shantou. Cui has no job and a lot of free time, so she always goes to Longhu Canal to find someone to talk to. She has been living in Shantou for three months, and goes to the canal every afternoon.

“The ditch is long and beautiful, but there is so much litter on the surface,” she said.
“Why do they throw litter into the ditch? The government spent so much time and money on renovating it,” she asked no one in particular as she stood on the edge of the ditch.

He Dawen, a city official, gave a speech at a government conference in February to draw attention to the canal.

“Very few citizens have awareness of hygiene and environmental protection,” said Shantou’s commissar and deputy headmaster of Shantou First Middle School. “They sometimes conveniently throw cigarettes, cartons, plastic and other garbage into the ditch. Moreover, a few small food shops pour the sewage and the waste into the ditch.”

He suggested the government strengthen daily management and clean up of the canal.
However, those in charge of cleaning the canal say there is no regular schedule for clean up. Liao Yao Guang, a worker of the environmental cleaning department said, “the Sanitation Authority would dispatch workers to clean up the canal and the green belt when sanitation workers find it dirty, no stated time.”

The 43-year-old said the cleaning process is not easy, they will fish out the litter on the surface by riding a boat, then they let out all the sewage water, the ditch should be dry up, finally they can fill it up with clean water.

“We just do the cleaning work, people pollute the water, and we clean it. Maybe the government can take more actions to stop people polluting this ditch,” he said.

Since He made the suggestion, the authorities have not done any project yet.