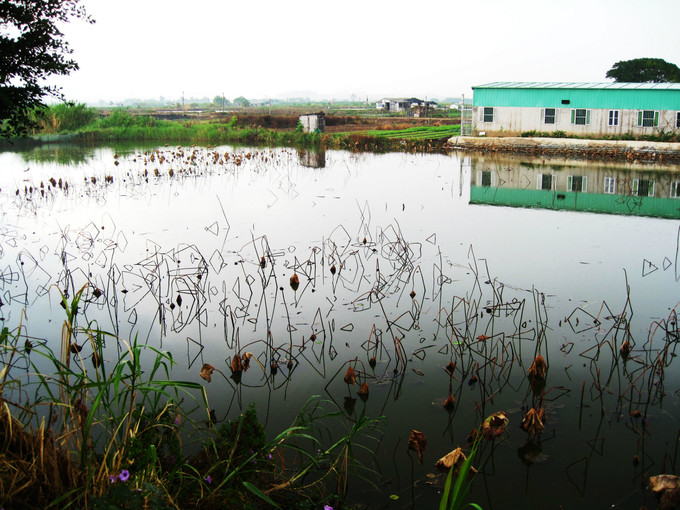 Lin Caixia was processing parts of toy truck in a small, shabby bungalow, while her 6-year-old daughter and husband were carrying dozens of wet griddles to a barnyard to be dried.

For the past ten years, they have been hired to look after a fish pond in Niutianyang of about 6 hectares. Water quality, however, has affected the quantity of their catch especially for the more sensitive crabs.

“It does not really matter, and I don’t care so much about the water,” said Lin’s husband, Lin Yingshu. “Fishes and shrimp can adapt to dirty water easily. Crabs, however, cannot survive. Five or six years ago, every hectare could yield 40,000 kilos more, but last year, it was 22,000 kilos per hectare.”

Niutianyang is located in the western part of Shantou, along the coast with about 1,300 hectares of fish ponds looked after by about 100 people.

Niutianyang was land reclaimed from the sea in 1962. But it is more famous because of a typhoon disaster, in 1969, when more than 470 soldiers died in efforts to protect the area and people. The government has built a monument to attract tourists and commemorate their bravery.

Many people come here to enjoy eco-tourism. Wang Yu comes here and pays a fee to fish and bring home whatever he catches. “I always drive here to fish, sometimes with my family,” Yu said. “Niutianyang is wonderful to fish. It is quiet and relaxing. Besides, the fish here are much better than in the markets.”

The water mainly comes from the sea without any process of purification. According to Lin’s husband, two years ago, a steel plant was built on another bank of the sea. It poured its waste water into the sea, consequently, polluting the same water that goes into the fish ponds.

“You see, our crabs are still fresh without any smell. So there is no need to purify the water, maybe the water became clear again,” said Lin. “The water in the downtown is much worse than the water here. So our fish is better than fish in other places of Shantou.”

“If the water is polluted, so will be the fish. If the fish is polluted I would rather buy it in the market. Sometimes, the fish here is getting a little smelly,” Yu said.

Both Tuojiang and Rongjiang river are major rivers that cross Shantou. Both of them have been severely polluted, and lead into the sea of Shantou. This is another cause of the pollution of sea.

The tourism administration, however, said there was no pollution in the sea near Niutianyang. “The water there is OK, We have never heard about the pollution of the sea.”