Every day from Monday to Friday, 17 middle-aged workers sit in front of the building of Shantou Power Bureau near Jinsha park in Jinping district, one of the most prosperous places in Shantou. A banner they have hung between two trees says “Maintain Legal Rights” and “Give Our Jobs Back.”

As protests go, it’s low key: The demonstrators usually sit in a circle on their own chairs, making tea with their own hot water and tea leaves. On the rainy days, they move to the Jingfeng Building for a shelter nearby. During the weekend and pouring wet days, they are off. The demonstration has gone on for four months.

It is rare to see long-lasting public demonstrations in Shantou, but the target of this one is a common China story: the privatization of state owned companies, and the end of a system that provided workers life-long employment.

The demonstrators are workers of the Tuopu Power Plant, a company that used to belong to the Shantou Power Bureau, a state-owned utility. The Tuopu Power Plant was privatized in 1994. Now it has stopped producing power and is facing bankruptcy. Its workers have been told to find new jobs. Along the way someone forgot to tell the employees they were working for a private company, the protestors say. They have a constant refrain: We were supposed to be life-long workers of a state-owned company, and we want our iron rice bowl back. They are demonstrating to convince the utility company to give their jobs back.

The workers say their job status was illegally changed when the Tuopu plant was privatized in 1994. But according to insiders in the state-owned company, the workers were informed that they had become private company employees in 1994. The workers, however, deny knowing about their change in status.

Before the privatization of the plant, about 100 young workers from the Shantou Power Bureau, including the 17 demonstrators, were sent to the Tuopu plant to work from 1990 to late 1993. They installed nearly 30 sets of diesel generators, which helped to build up Tuopu Power Plant.

But by 2006, the Tuopu plant was facing the rising oil prices and bankruptcy. They were also facing a government regulation that all diesel generator powered factories must be shut by 2010. Now the company is selling off the diesel generators so that the workers can be paid. But still the workers face unemployment.

“That was strange,” said one of the demonstrators, Huang Weitao, “We were supposed to be life-long workers.” He said that since the Shantou Power Bureau, their employer in their eyes, is not going bankrupt, they shouldn’t lose their iron rice bowl.

In China, before the Labor System Reformation in 1986, some of those who work for state-owned company had an “iron rice bowl” and never worried about unemployment. Since the workers joined the Bureau before 1986, they believed they were part of this system.

But in late 2006 the manager Fang Jianwu informed them that the Tuopu plant would close and they would have to find new jobs. Huang Weitao and other workers negotiated with the private company from then on, but they failed to reach an agreement.

Telling the story, Huang, the de facto leader of the group, was most talkative among the demonstrators. Twice while talking to reporters, security guards from the Bureau came out to harass the group. At one point, Huang and his workmates burst into anger and quarreled with the guard in local dialect.

At the age of 17, Huang Weitao passed the entrance test and became a proud “life-long” worker in Shantou Power Bureau. When he was sent to Tuopu Plant, he was 27, at an age he described himself as energetic and enthusiastic. “It is my unfortunate destiny to contribute my youth to the company,”he said.

Whether Huang and other protestors are unfortunate or not, they have to live with their decisions, according to Du Xiaodan, a representative of the worker’s union in the Shantou Power Bureau. “It is a matter of choice,” Du said, comparing the workers’ decisions to high school students choosing their university before the College Entrance Examination.

“They all knew,” Du said. He also said that some staff in the public utility company were even willing to move to the privatized Tuopu company for higher salaries and benefits. Du pointed out that the workers had signed the contracts with Tuopu plant and  knew their employer had changed.

“They have signed three contracts in all,” said Du Xiaodan in the Bureau. He explained that according to the Chinese Labor Law, after workers signed another contract, the first contract will be put an end.

However the strikers insist that the contracts are fake and illegal. “If 100 Yuan cash is fake, it is not really 100 Yuan,” said Huang Weitao.

Ma Shenghui, another worker among the demonstrators, is the group’s expert on contracts. He said that a valid contract should be ratified by the Shantou Labor Bureau, the official department in charge of employer-employee relationships in Shantou.They were sure that the contracts were not ratified.

“They never want to talk with us face to face in a reasonable way,” Ma said, pointing to the Bureau building. “They just do something secretly behind us.” 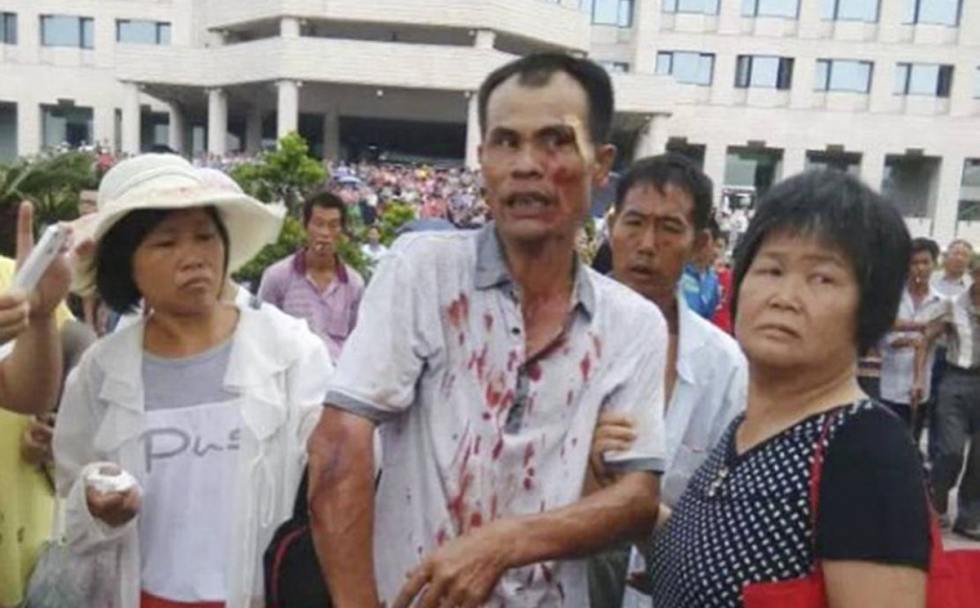 When asked why they did not sue the Bureau, since they are so determined, Huang said that the public utility was a “superpower” in the city and would simply ignore the ruling. He also smiled and said that they didn’t have money to afford a lawsuit. No lawyer would be willing to take it, either, he said.

Journalists of News.Myshantou.net took the copies of three contracts of the disputed contracts and consulted the Shantou Legal Aid Center.

Both of the contracts signed with Tuopu Power Plant were valid, which means the labor relationship with the state-owned company had lost its validity, said Lu Ying, a consultant in the Legal Aid Center.

“It doesn’t matter whether the contracts have been ratified or not by the Labor Bureau,it does come into force, as long as both sides come to an agreement and sign it,” said Lu.

On January 11 this year, the 17 of the workers protested carrying banners near the building gate. Guards stopped them. They were not real riot police, but in uniform and temporarily employed by the Bureau, the demonstrators said.

“We were frightened to death!” Huang Weitao, said jokingly, referring to a lack of bravery among the demonstrators. “Then we could only sit here quietly.”Others in the group laughed at Huang’s self-deprecating humor.

But Ma Shenghui, another demonstrator, said in a heavy tone. “We have come through all sorts of oppression and we have overcome.”

There used to be 88 protesting workers. Now, only the 17 are still holding on. “Those who have given up lose their right to defend their rights,”said Huang Weitao.

Huang has a sense that middle-aged men like him are supposed to be pillars of the family, with the responsibility of raising children and attending to the elderly. But he believes in the value of demonstrating. “We are not killing the time,”he said. “We are persisting for our future life and for the sake of justice.”