Former Prime Minister of Israel Shimon Peres and Hong Kong billionaire and STU benefactor Li Ka Shing are expected to visit Shantou University this week to participate in a several-day event for the construction launch of the Guangdong-Technion Israel Institute of Technology.

Guangdong province governor Zhu Xiaodan and a number of local Shantou government officials are also expected to be in attendance at the ceremony. Sources close to the event have said that a representative of the central government — one of China’s four acting vice premiers — may be in attendance, but this could not be independently confirmed by MyShantou.org reporters. 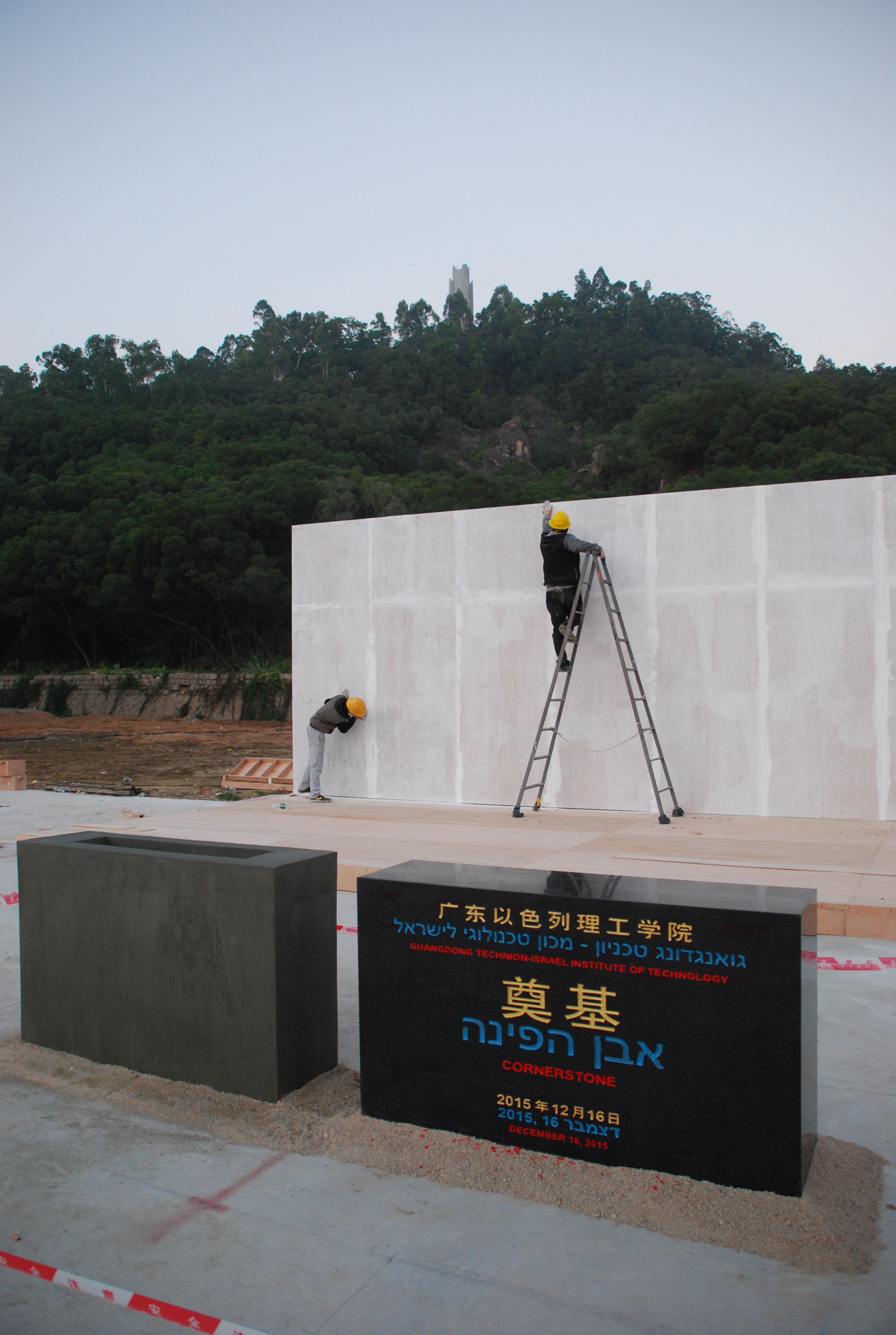 Workers prepare the setting for Wednesday’s cornerstone-laying ceremony. The cornerstone is written in Chinese, Hebrew, and English. Photo: John Noonan

Guangdong-Technion will be a cooperative Chinese-Israeli university attached to Shantou University and will focus science and technology, and is part of a growing number of foreign-Chinese university programs. Shantou University provost Gu Peihua said in an interview posted on the Li Ka Shing Foundation website that Israel’s Technion provided an example of how China could bring new ideas into its economy.

“What Technion has done to advance the Israeli economy through student and staff research and innovation is an example for Chinese universities to follow,” Gu said. “If many universities in Guangdong and China do the same as Technion has been doing in Israel, an innovation-based economy will emerge.”

A temporary facility for Technion has been created out of a former administration building on campus, and some sources put the arrival of Technion staff and faculty as soon as spring 2016. Guangdong-Technion is expected to be fully operational by 2020. 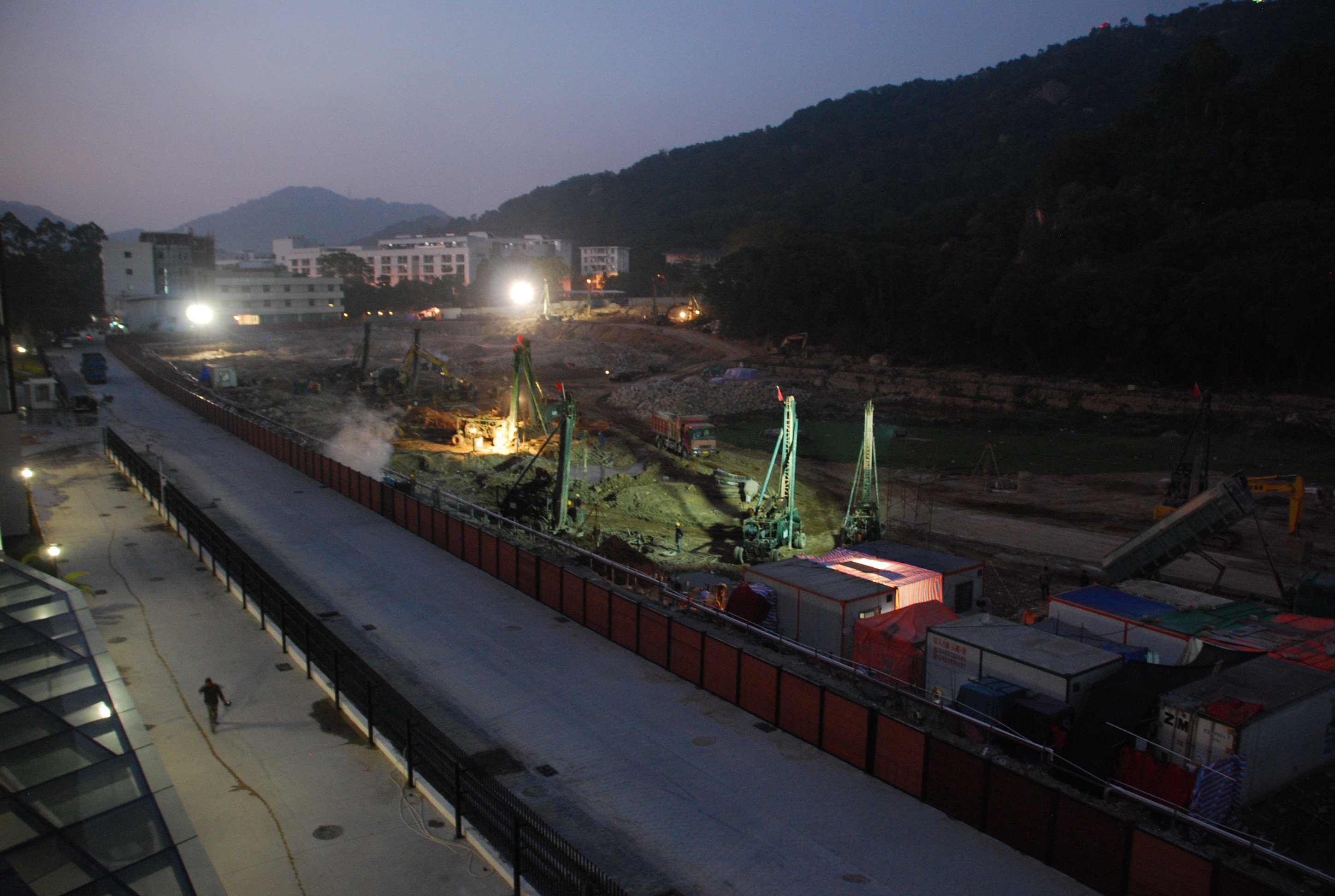 The first section of the Guangdong-Technion site, immediately south of East Gate, between the Sangpu hills and the new sports arena. Future plans for Technion’s expansion include a larger site across Daxue Lu. Photo: John Noonan

Technion-Israel Institute of Technology — often referred to as the MIT of Israel — is one of that nation’s oldest and most prestigious universities; three Nobel prize winners are current faculty members, and Albert Einstein was the founder of the first Technion Society. Bloomberg news and financial services rated Technion as the seventh best high-tech institution in the world in 2013. Technion was also instrumental in setting Israel’s national identity, deciding upon Hebrew as its language of instruction.

The Guangdong and local Shantou governments have contributed roughly 147 million U.S. dollars to the construction of the Guangdong-Technion site.The Li Ka Shing Foundation has donated 130 million U.S. dollars to Technion in Israel — in part for infrastructure and development at its Guangdong site, according to a press release on the LKSF site. Those funds, the release also said, were largely generated by the sale of Waze — an Israeli GPS technology Li’s company Horizons had invested in — to Google. Technology website TechCrunch put the sale of Waze to Google at 1.1 billion U.S. dollars.

This week’s events at Shantou University will include a cornerstone laying ceremony for Technion on Wednesday morning and a symposium the same afternoon entitled “What Tomorrow Looks Like: Innovation and the Future of Education.” A tour of STU’s recently unveiled new medical college will take place, as well as the signing of collaborative agreements between the Chinese and the Israelis, according to a tentative itinerary and schedule of events.

Former Prime Minister Peres and Li Ka Shing have met previously, in 2013 on Li’s first visit to Israel. The relationship between the Li Ka Shing Foundation and Israel’s Technion dates back to 2011, according to a statement from Israeli Missions Around the World, when Foundation representatives visited Israel, followed by a visit from Technion president Peretz Lavie to Hong Kong.

A Jerusalem Post article from October 2013 describes former Prime Minister Peres as “marvelling” over China’s transformation from poverty to wealth over the last several decades. “Whoever thought it would become the second-greatest economy in the world? It’s unprecedented!” Peres is quoted as saying.

Shantou University and the surrounding area of Tuopu and Daxue Lu have undergone extensive renovations in preparation for both the cornerstone laying ceremony and the wider, long-term presence of Technion. 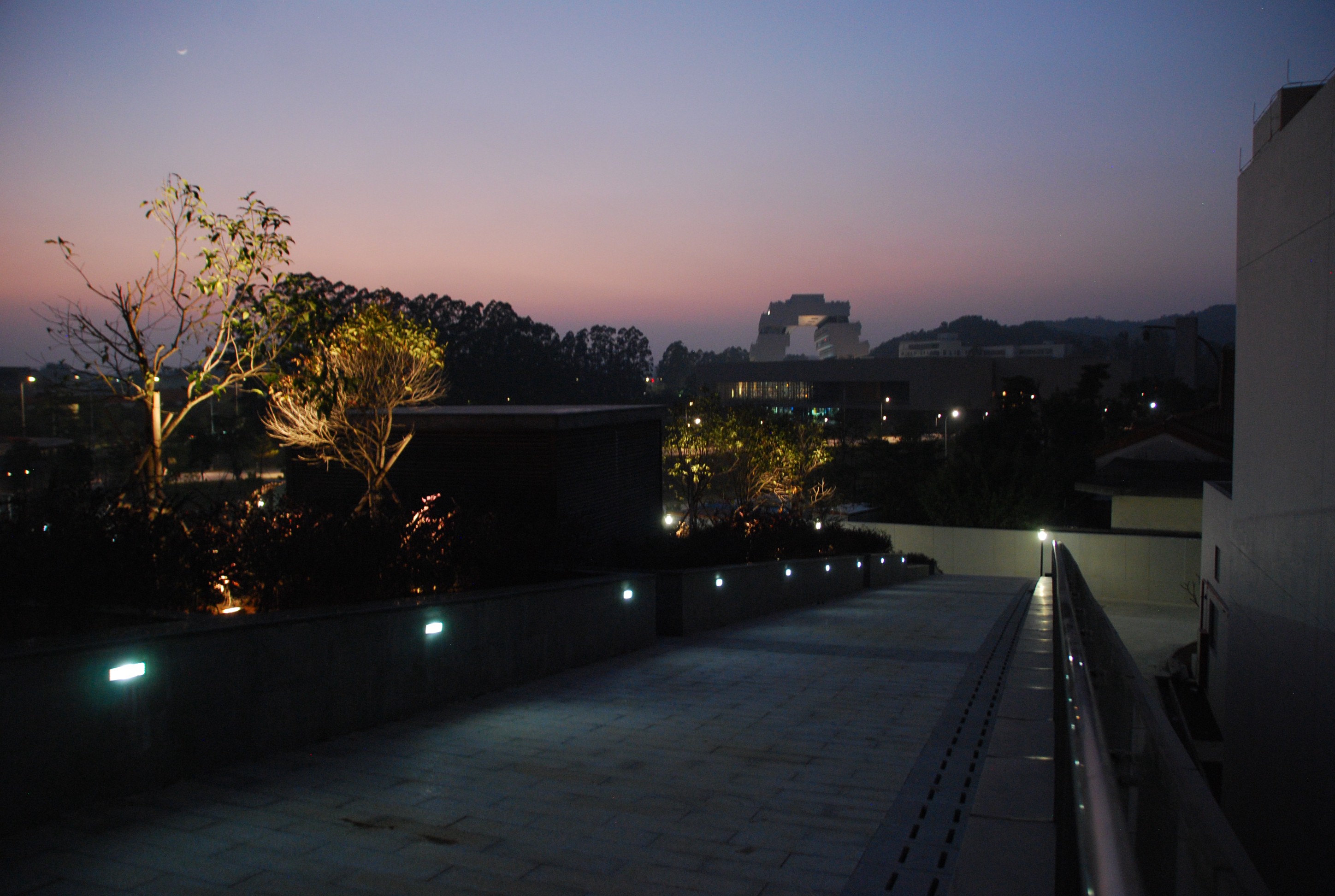 This week’s events will largely take place in the recently-completed Shantou University Sports Park, an arena, conference center, and upscale hotel directly across from the Technion site. The sports park was designed by renowned designer David Manica, and features a rooftop park and greenery area. Sports park general manager Greg Turner said the facility and STU improvements were inspired by Li Ka Shing’s seeing the transformation of Beijing during the Olympics, and the idea that similar development in Shantou might affect local people positively.

“It can help them open up to the world, and help them grow as international citizens,” said Turner, referring to the people of Shantou.

Reconstruction of Daxue Lu outside the university — a project which had gone on for several years — appeared to be finalized several days ago, with the introduction of bilingual Chinese and English street signs. Extensive planting of trees, flowers, and other landscaping has occurred along Daxue Lu and in Tuopu, the section of Shantou immediately adjacent to the new Technion and sports park site, and formerly one of Shantou’s grittiest areas.

East Gate, the university’s social and culinary center — where plastic chairs, food carts, and rusty metal doors have been the norm for years — has recently undergone its own extensive renovation. Months’ worth of renovation to a budget hotel there recently finished to reveal a new facade, which matches the color of the sports arena hotel. Tiles have been laid in the narrow alley of shops and restaurants inside the gate, and uniform Chinese-English bilingual signs were put up over restaurants and shops late on Saturday night — albeit with English that would cause the average reader to pause a beat or two: “Demon” was the translation for a local footwear shop, and “The Goods” for a local mom-and-pop dollar store. 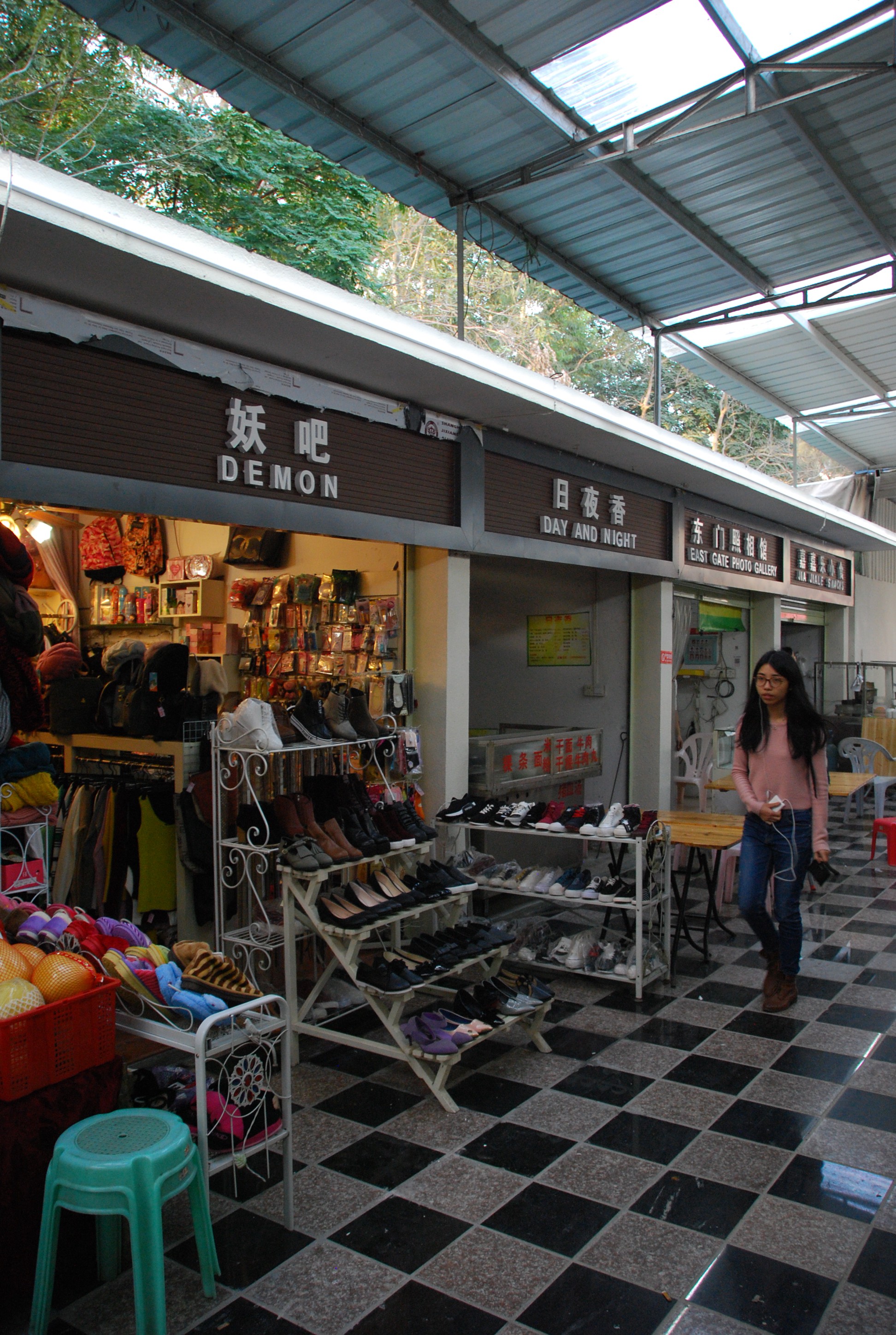 A passerby in the narrow alley of shops at East Gate. Uniform signs and awnings appeared on shops and restaurants over the weekend. Photo: John Noonan