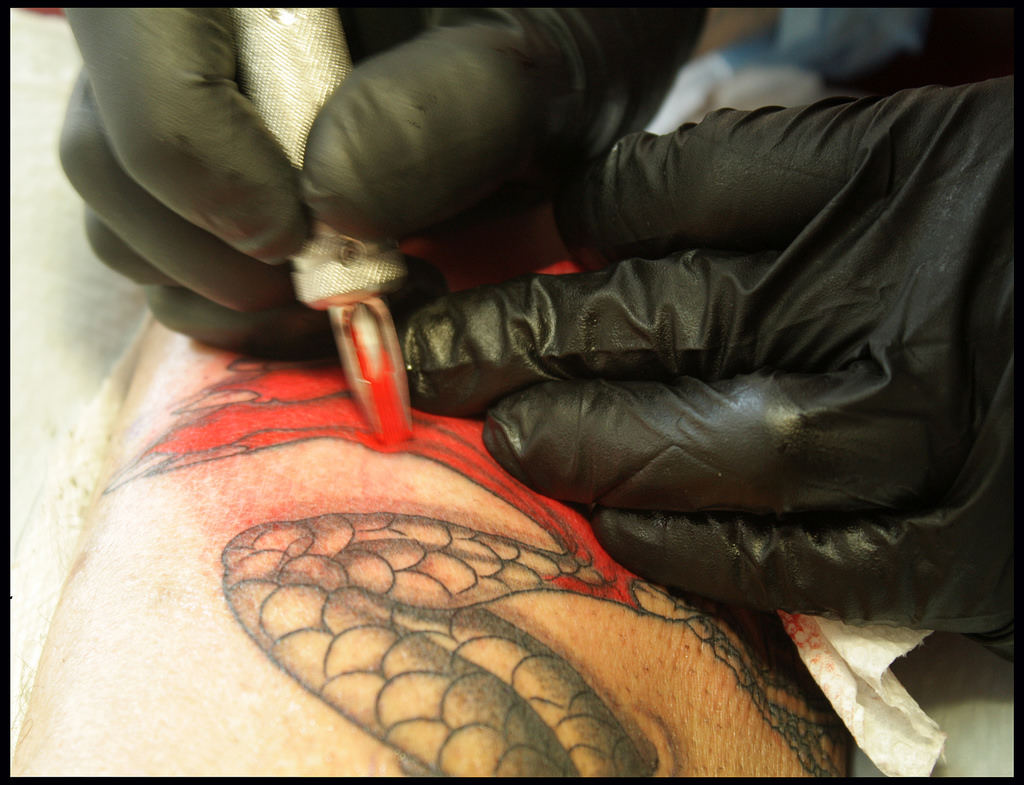 Located in the west gate of Jinmei Garden in Jinsha road, there is a parlor called “Red Dragon Tattoo Studio” four words in red lettering. Different tattoo designs lay in the shop window, artistic though simple. Separated from the waiting room with the glass door, a curtain provides some privacy for customers. It’s easy to see the equipment and tools in the studio are quite professional, and everything there seems in order. Perhaps it’s part of the reason that there’s a new type of customer these days at the parlor: young professional women.

As to the name of the parlor “Red Dragon Tattoo Studio”, apparently their dragon stands for their Chinese cultural heritage the Chinese are said to be descended from dragons, while the color red symbolizes joy and festivity in China. It is the first and the most professional tattoo studio in Shantou at present.

Looking through the glass of shopwindow, a man wearing a black T’ang uniform and sporting short hair was tattooing a customer with the image of a small, marvelous pterosaur coming out of his left sleeve. Wearing a pair of disposable gloves, he held a professional mechanical tattoo needle on his right hand while pressing the client’s skin with his left hand, concentrating on his work. His name is WangBin, who is the tattoo artist, as well as the owner of the parlor. He also goes by the artsy moniker Red Dragon Tattoo, after his studio.

Mr. Wang, who is over thirty-eight, is originally from Shandong province. About 17 years ago, he came to Shantou. He is one of those typical openhearted northern men with a strong personality.

Having a great passion for art, he has a love of painting which dates back to his childhood. In about 1992, he had graduated in Jinan Industrial Arts College and has improved his painting skills since then.The first time he came into contact with tattoos was the time when he was getting one for himself in 1999. Since then he has spent altogether five years studying tattoo art by himself because of interest. His drawing background makes him quickly become a good tattoo artist in Shantou. “The tattoo Red Dragon designed for me was just what I really wanted and it’s indescribable,” said Ms. Zhang, one of his clients, commenting on a butterfly she got on her bellybutton at this parlor.

Wang opened his store in 2004. It does tattooing, covering up scars or birthmarks with tattoos and tattoo modification. Nowadays he has already earned a good reputation in the area. Many people have come for tattoos because they heard of his skills and professional attitude, and most of them are white-collar workers. As to the price, it ranges from 300 yuan to 12000 yuan, depending on the size of the tattoo.

So interesting is that it is more popular among female than male customers in Shantou. It puzzles him properly. He muses, “Maybe the aesthetic needs of women are much stronger than those of men. When women ask me to tattoo them, they love to let me tattoo the sexy parts of their bodies, such as their chests, backsides, waists and their ankles. It’s perfect!”

However, tattoos are not just drawing as skin is a kind of canvas which is quite different from other kinds of material. What’s more, skin could possibly dry out, and have pimples or wrinkles. That is the most challenging paper for Wang to do tattooing.

Then in 2006, he went to several well-known tattoo artists at that time, and studied their skills and techniques. Last year he took part in the 2007 China International Tattoo Arts Convention as one of the the new powers in Beijing. During the meeting, tattoo artists met with other famous tattoo artists from all over the world and all over China, such as Shanghai Tianzuntang, Beijing Stabber and Beijing Mummy.

After more and more experiences of giving tattoos and studying there, he found that giving tattoos is not simple at all. Fortunately he has had great patience to discuss the skills with his teachers. He knew that besides the basic painting skills, they also need many skills of using needles and their own designs.”It is not just giving our customers what they want to tattoo,” said XiaoShizhe, one of his teachers who is a famous tattoo artist from Taiwan. “The natural tattoo is one which has the ideally organic unity of tattoo design and the body.” He told WangBin that it’s a great fate that they can do tattooing on the bodies of the customers.”As a tattoo artist, you must take tattooing seriously. Besides, cherish every inch of customers’ skin as if it were your own.”

Under the teachers’direction, Wang has channels his inspiration into the tattoos he designs. What’s more, he is very persistent about what he is doing. When finishing a tattoo, he always feels satisfied and comforted in the moment. However, when he sees the same one next time, he will find out lots of flaws that he hadn’t found before. Then he tries to improve it. Now, Wang is confident of his tattoo, though it’s less popular in Chaoshan areas, compared to other developed regions.

“Let ink meet skin!” Wang said with excitement, “The human body is the most beautiful artwork! Tattoo in any part of your body would bring you with mystery and uniqueness.” It can add a certain strange fascination to males, while it brings some sex appeal to females. He believes that the more efforts the tattoo artists make, the more popular it’ll be in Chaoshan areas.