Wearing loose T-shirts marked “I love ST” (ST meaning Shantou), baggy pants, hats, head scarves and fat shoes, the rappers looked slightly out of place on stage in the Great Hall of Shantou University on May 4, 2008. They looked as though they were being controlled by the music and they swung their bodies to the beat. The audience was riveted to the music and clapped along, even though they didn’t understand what the group was saying: Unique among hip-hoppers, these artists were rapping in Chaoshan dialect. 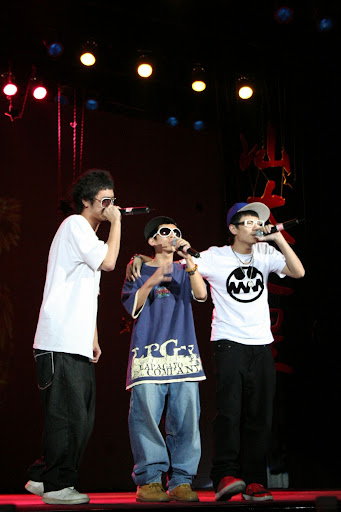 The stage lighting, the strong sense of rhythm and the cheers all helped the audience feel the music’s passion.

Who ignited the passion? It’s “AFinger”the only official professional hip-hip group in Shantou. There are 12 people in “AFinger”. They are Snake, Jar, Cap, LilBiz, Co-G, Mossa, Alion, 10Stroke, POP, Megatron, Stone and Blue.S. Rap is the main style of their music and rapping in the Chaoshan dialect is their greatest feature.

“We rap what happening in Shantou in Chaoshan hua because we want local people to be more cordial and attract more people to expand our visibility,” Snake said. “Even in China, we’re the first hip-hop group rapping in dialect.” Snake who is always wearing hip-hop style is the leader of “AFinger”.

“Ten years ago, one girl asked me, will you wear hip-hop style forever?’” Snake said proudly. “If she watches TV, she will be surprised that I’m still sporting the hip-hop style.”

Within the group, there is a clear division of labor different members are responsible for creating music and lyrics, sound recording, singing, designing album covers and publicity. In 2008-2-2, the group launched their first album “Da Ji Li Shi” (meaning everything goes smoothly) in the eastern part of Guangdong. It includes 11 tracks. The lyrics all came from life, for example, “Today Sight.”

“It’s about a popular TV show which runs on the second channel of Shantou TV. Everyday I come home and my family is watching the program. I think many local people have the same habit. So I created the song. Many other songs are like that, for example, ‘QQ March,’ is about QQ, a common Internet chat tool used by many youths, and ‘Blue River,’ is about the popular Shantou website of the same name,” Cap, who is in charge of writing lyrics, said.

Because of the album, they are famous in the China hip-hop community. The 2007 China Hip-hop Awards invited them as guests.

“Even though we didn’t win a cup, it means the China hip-hop community pays attention to us. It’s encouraging to us,” Snake said.

They are minor celebrities now, but they face more pressure from work, critics and money for running the studio. Hip-hop is still fringe music in Shantou. It has a very limited audience of fans, and many people think playing hip-hop in China cannot be profitable and members are naive and idealistic. Even Cap’s parents think so.

Cap is 21 years old. After he graduated from senior high school, he joined the AFinger team. At that time, his parents were strongly opposed and found a job for him.

“I don’t care what they said. I can’t do something I don’t like,” Cap said determinedly.

Cap doesn’t live at home anymore. He lives in the studio and his band-mates pay for his day-to-day expenses. 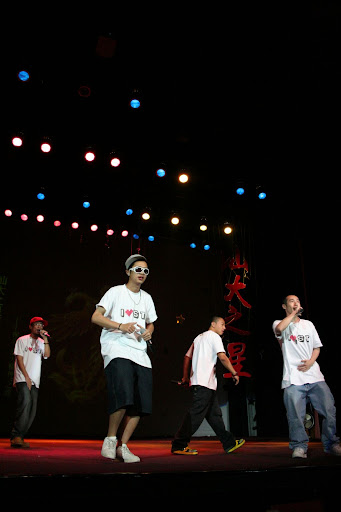 In the group, most members are expected to find another job to give financial support to the studio’s operation. They said their main job is playing music, while other jobs are just part-time. They have spent near 100,000 yuan on the studio. So far, they have recouped less than one third of their initial investment. This year they sold near 6000 albums worth 12yuan each, but that still isn’t enough to cover their costs. Besides the pressure above, they face the pressure from their peers.

In Shantou, there are many underground bands playing hip-hop music. But they don’t organize official bands and just play informally. Now that AFinger group is gaining some local notoriety, many underground bands are making irresponsible remarks about them. They say that Afinger is commercialized and disingenuous for hip-hop music because Afinger is rapping what local people care about.

“I admit we are commercialized and we support commercialization. In Shantou, hip-hop is fringe music. In order to get more people’s attention, we should rap about what people care about. When we’re famous enough, then we can rap about what we want to rap about, like Eminem,” Snake said.

“Crazy” is a song that incorporates obscenities into the lyrics.They want to show the underground scene that they aren’t just rapping about popular issues, but that they also rap about what they want. But they just put such controversial songs in Internet and will not promote them in the market.

“Many people think hip-hop is indecent and ignore it. I want to guide people to recognize healthy hip-hop culture, so we will not promote songs like that in the market,” Snake said.

Helping people recognize healthy hip-hop culture is Snake’s big wish. Besides creating new songs, the group will go to normal schools to tell students hip-hop’s history and teach them how to free-style rap.

“AFinger” means they want to take a seat in China hip-hop community, but they still have their work cut out for them. However, they are working hard on it. They usually perform free to promote AFinger. Now they plan to perform for TV and record songs about the Olympics.