One day in March 2008, Lee, around 25, shopped with his friend in Jin Xin Road in downtown Shantou. The street also called Walking Street was crowded with young people every where buying clothes as usual. Almost in the same second, some boys and girls around Lee stop moving: two boys and two girls were playing gobang on the floor, one young man were sending sms when walking, two guys were playing flyingcup game on the table in the middle of the street for 5 minutes, up to 20 young people in the street were keeping still, even though they were in the middle of walking, drinking or tying shoelaces. 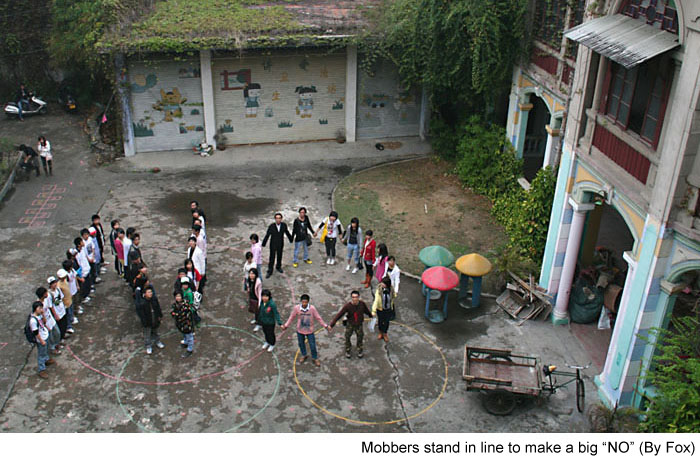 “That is bizarre,” Lee said with a bewilder look. Before he figured out what happened, the weird group quickly moved on and disappeared.

It’s not the only time that in Shantou a bunch of young people, most of them are students, surprised passers-by in a public place like street and shopping mall. This movement is famous in the occident, which named flash mob: jokers gather en masse using internet technology, perform a scheduled act and then disperse quickly.

Since the first flash mob movement organized in Manhattan, US, 2003, by Bill Wasik, when about 50 participators flooded into a hotel and applauded together for 15 seconds, the act crazily spread cross American and Europe. Later in the next year, 2004, the first Chinese mobbers appeared in Beijing. From then on, Flash mob began popular among Chinese youth.

There are different forms of flash mob, such as pillow fight flash mob, zombie walk flash mob, synchronized applause or keeping still, birdcall and so on. Most of the mobbers are not care about the forms but the fact that they attracted people. Why much young men are crazy for this game? The staff in Moral Education Office of Shantou Education Bureau, Ms Chen, gave an answer: the new generation are yearn for showing themselves to others and getting attention. She said that some young people now are facing huge pressures and want to find a way to release.

The first flash mob incident of Shantou occurred in September 2004, when the internet gained ground in the city. When night fell in the People Square in downtown, a group of boys ran quickly from far and near to the fountain in the east of the square and took off their shoes, marching in a circle around the fountain. After several minutes, the boys put on their shoes and dropped off in a second. The sudden action surprised citizens strolling in the square very much. There was hardly nobody knew what’s the action, according to Ding Shuo, a journalist in Shantou. “The flash mob in Shantou in a sense is following the world trend closely,” Ding said.

He mentioned that several students lay on the floor and pretended to dead in Jing Xing Road years ago, 2004, caused a tumult in the street and the pass-by even called the police for help. “We have right of assemblage,” Ding said. But he pointed out that they need to improve by making the flash mob meaningful but not harmful. 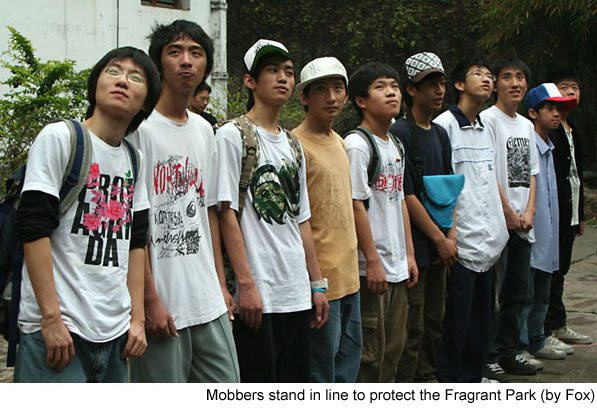 On March 29, 2008, Ding Shuo organized a flash mob action in Fragrant Park, an old building in old part of Shantou facing torn down problem. Ding and other mobbers lined in a big letter “NO” to protect the building. Ding said that they hoped more citizens could pay more attention of the old building in Shatou through the flash mob movement. In the ten minutes action, an old woman in the neighborhood came out and shouted to the mobbers “mad”, and other neighborhood seemed no interest in their action.But the mobbers believed they are right. “It do have the reaction although the way is special,” Jimi, a mobbers in the action working in website company said. Ms Hu, a young girl in the group said she hoped the flash mob can persuaded more Shantouese protecting their culture patrimony.

Beside, Ding Shuo with his friend SK, a 18 years old high school student in Shantou, organized a “follow walk flash mob” on 16th, this April. As other flash mob, the action collected people and announced the mainly instruction on Shantou’s several electronic forums in internet, like Ezeem.com and Blue Riverside BBS, QQ chatting room (a way of online chat) and email. Before the movement, around forty young people gathered in the park of Wal-Mart store and the organized instructed the detail plan. Later soon, they stood in a long queue and walked following their chose target, tow girls shopping. At the first minutes, the girls didn’t notice the crowd behind them, but soon they were scared by the mobbing and ran away with laughter. Subsequently, the mobbers went to find a new target. The flash mobbing is bizarre in most citizens’ eye, but SK defecated that it’s just for fun and harmless. 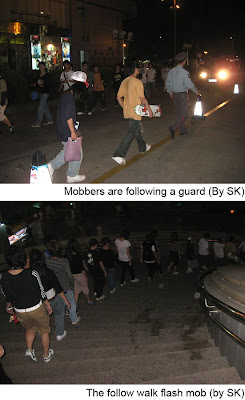 Like the “keeping still game” in March, flash mob are usually predetermined. However, the organizer would not release the detailed plan, such as the exactly time, location and secret signal to begin unless the last minute. The flash mobbers don’t want the plan tipped off and failed, according to the young mobber SK.

Chen Ning, a guy who is one of the “fastest hands man” of play flyingcup match in the Shantou, held three times flyingcup flash mob. Flyingcup is a game to compete the rapidity of piling up paper cups to certain shapes, and the faster the better. This February, Chen with his fellows performed a sudden flyingcup match in McDonald restaurant. In the busy McDonald, when everybody was eating, Chen Ning wearing a red T-shirt came to the counter, got a straw and held over the head as a secret beginning signal. Simultaneously, strong sound like rainstorm filled with every where in the restaurant. It was the mobbers playing flyingcup game and the big sound was made by the cups piling. In a given short time, the group ran out of the hall leaving people with puzzle.

“That was my first time to join the flash mob,” Tang, a 16 years old mobber, said, “I was so intense but excited.” Most of the flash mob participants said that they are excited to see the viewers’ open-eyes with surprise.

Although, the flash mobbers know what they do may not be understood and accepted by most people in Shantou, they would like to plan and carry out more action. Recently, new flash mob notice is posted in the QQ chatting room space. Although the details are not release, many mobbers of the group are ready to flash in the city.