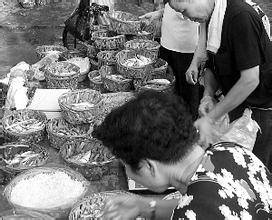 Xu Leiyong was smoking quietly, sitting in the bow of his boat. At his side, his wife Shen Xiaofeng was cleaning up the fishing nets. It isn’t the end of the season for baby eels but they have no intention of fishing the baby eels again.

“It’s more and more difficult to catch baby eels now, even at a time when cold,” said Xu, who has almost eight years for the baby eel fishing.

The season of baby eel began in early February this year. In general, the quantity of the baby eels will increase when it gets colder.

“The number of the baby eels has reduced substantially since 2007,” he added.

The national problem is reflected in Shantou.

Fishermen in Shantou including Xu catch baby eels at Hanjiang River estuary every year. The local media reported many times that in recent years, the pollution in Hanjiang River has been more and more serious, while the marine environment near the Shantou Port was also damaged because of the ongoing port construction.

“Water quality deterioration is the main reason for the reduction of baby eels,” said Li Yuanyou, the director of the institute of marine biology in Shantou University, and one of the directors of Guangdong Zoological Society and Guangdong Ocean (limnology) Society.

“Eels require good quality of the living environment. Once the water has been contaminated, the resistance of the eels is visibly reduced and then they will be sick or even die. Also, the polluted environment will affect their reproductive capacity directly,” he said.

Eels live in the river and migrate to the ocean to spawn babies when they are mature. They spawn only once in their lifetime and die right after the spawning. After a period of time, the babies will return to the river on their own to grow into adults and begin the cycle again.

“If the pollution problem isn’t solved effectively, the survival rate of the eel will continue to decline,” Li said. “The less mothers migrate to the sea to spawn, and the less babies can return to the river. It is a vicious circle.”

“In addition, over-fishing is also a reason for the reduction of baby eels,” he added.

Fishermen are further affected by the lowering price of baby eels.

Lots of fishermen are upset and angry about the fall in price. They have to suspend the baby eel fishing in order to reduce their losses. The fuel for the boat, the fishing equipment and manpower are all a spending for the fishing. The fishermen usually work in the evening because baby eels mostly appear at night. They need to set the nets away from the water gate and catch baby eels with the tides. Lighting is also important because it will attract more baby eels.

“The price is too low. Continuing to catch baby eels is only a thankless task,” Xu said. He has decided to catch other seafood and wait for the upcoming spring fishing season.

Shantou adult eels are mainly exported abroad, especially to the number one consumer: Japan. On Jan. 30, 2008, 10 Japanese got food poisoning after they ate some dumplings made in China. Subsequently, Japan stepped up its monitoring of Chinese food and stopped the sale of Chinese food in some areas.

“It led to a substantial reduction of the eel exports,” Chen said. The statistics from the Customs of China shows that the number of roast eels imported by Japan from China dropped by 75.5 percent in 2008.

“The export of roast eels and live eels is reducing, and the domestic market is also depressed. Consequently, the scale of the eel fishery become smaller and smaller and is no longer to purchase large numbers of baby eels,” he said.