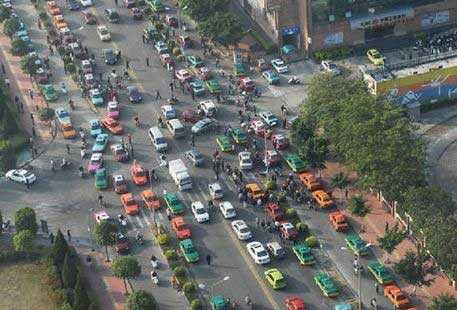 Seeing a man in the late 20s walking out of Shantou Bus Transportation Center, Zhang Xiaosong and three other taxi drivers rushed to him.

“Do you want a taxi? Use the meter?” those four drivers asked.

“I prefer bargaining. How much to the airport?” the man answered.

“Are you kidding? For such a distance, gas costs more than 25 yuan,”said Zhang.

After bargaining for about three minutes, these two hadn’t made a deal. Finally the man went away, leaving Zhang Xiaosong to wait for another passenger.

Taxi drivers like Zhang are struggling in an economy that is poor and where the long-established habit of bargaining drives down profits. Drivers are often caught between the rules – which require using the meter – and customers, who know they can haggle for a better price.

Also, a high number of illegal private cars and off-the-books taxis compete with legal taxis in Shantou, where elicit licenses can be purchased for a half or a third of legal ones.

“I have been a taxi driver in Shantou for 14 years. Bargaining is a hidden rule of taking taxis in this big modern city,” said Zhang, a 40-year-old driver from Shangqiu, Henan.”I prefer to use meter because I can earn a little more. However, if you refuse to bargain, there are so many taxis or even illegal ones waiting,” said Zhang.

The Path Transportation Management Rule issued by China in 1997 ordered taxis to use meters. However that law is rarely enforced in Shantou.

In order to improve their image and better their business, on February 20th, 50 representatives of the local main taxi companies signed an agreement in Shantou Bus Transportation Center, saying Shantou taxi drivers would use the meters and never cheat passengers.

But any trip around Shantou is often done off the meter. Taxi drivers going to and from the airport said that they did not use meters. They said they only took about two passengers a day because there weren’t so many flights in Shantou. “We should ask a little more to pay for our meals and support our lives,” said they.

Some customers feel that bargaining is the only way to ensure a fair price, as some drivers may tamper with meters or use roundabout ways of getting to a destination.

“I don’t know why the rate increases so quickly in Shantou. Maybe the driver traveling the farthest way or as someone said, they add accelerators to the meter,” said Wang Zhou, a Guizhou native who was cheated out of 10 yuan the first time she took a taxi here. After that, Wang said she accepted that she had to bargain to get a fair price.

Despite the fact that many reasons made bargaining so popular in Shantou, Shantou’s economy contributed the most. Little passengers and a number of competitors forced the taxi drivers to bargain and earn less.

According to the director of Shantou Transportation Association Taxi and Car Department, Li Changshun, in Haojiang, Shengping and Longhu only 4% of local people (1,420,000 in total) and 8% of migrants (230,000 in total) would choose to take taxis.

On the other hand, Shantou was most famous for its illegal-based development, for example smuggling, corruption and fake goods. The magazine Nan Feng Chuang even wrote an article about Shantou’s economy, saying it was kind of “black and not healthy”.

Also, illegal cars that carry passengers are a problem in Shantou. Only handing 800 yuan every month to some government officials secretly, those private or scrapped cars can work as taxis and earn money without licenses, according to a report in Nanfang Daily newspaper. However, the fee that legal taxi should hand is 1700-2400yuan every month, depending on which taxi company a driver works for.

In this way, illegal taxis had been a big challenge for legal taxis like Zhang. Now Shantou only has 1233 legal taxis. Last year before the strike of taxi drivers in November, when more than one thousand taxi drivers stopped working to protest illegal taxis, illicit cars and taxis were at least three times than legal ones.

Even after the government punished some illegal taxis in December, there are still about 2000 illegal taxis, including 1000 private cars, according to Li Changshun, the taxi association director.

“I know there are still many illegal taxis and it’s hard for us to compete with them. We have to hand 200 yuan every day to our firm no matter how much we earn (It called Fenzi money. If you hand in, you can use the car for 12 hours) and they needn’t,” said a driver from Dalian Taxi Company who declined to give his name.

“I earn about 2000 yuan every month and it just makes ends meet,” said Zhang. Until 11:30am, this Henan driver hadn’t got even one passenger and he had to pay two yuan for parking.

“It’s hard to do business,” Zhang sighed. Standing near his car, this guy kept on waiting.