About 50 to 60 students and teachers, half of whom were Sichuanese, held candles and sang after 9 pm on Thursday.

The university and the foundation that supports it are engaged in a variety of commemoration and donation activities in response to the worst earthquake in China in thirty years.

At the Thursday night ceremony, emotions ranged from a feeling of trying to boost damaged spirts to pure grief.

“Though we cannot go back to our hometown to relieve the people in disaster, we can send them our best wishes, “he said.

Then all the people stood in silent tribute for about three minutes. People wept as candles were lit and the songs began.

Li Mengmeng, one of Sichuan students, was weeping.

“When I finally dialed the number successfully, when I heard my mom speak, I was more than glad to say nothing,” she said.

She said that her parents were fortunate to escape, though the buildings they lived in were cracked during the quake. “Sichuan, come on! All the things will go well!”she called out.

At the end, those gathered at the ceremony sang songs including “Tomorrow Will Be Better” and “Mother Is The Best in This World,”  some of the most conventional songs Chinese sing to the victims of the “5.12” Sichuan earthquake, including those who became parentless.

Different ways of contributing by students and faculties have been undertaken on the campus since the “5.12”disaster occurred.

The Li Ka Shing Foundation, the biggest sponsor of Shantou University, announced a contribution of RMB 30 million from its “Just In Time Fund” to the Minstry of Civil Affairs and the Ministry of Education for assisting in the rebuilding in Sichuan, according to the university website.

Two days after the earthquake, a donation activity was organized by the Sichuan Students Union, with other students’ voluntary associations pitching in to help. Students passed by and without hesitation dropped cash into the boxes that had been set out. The organizers declared that the donations would be sent to the Red Cross.

The BBS Forum, the university’s online discussion forum, has been filled with posts of news on the quake, sadness and encouragement, and opinions on how students can help. 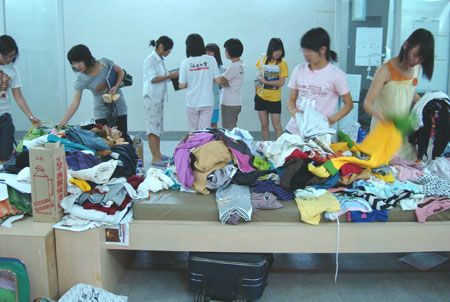 Girls from Room 101 in F dorm-building had their way to help. On 15th, three days after the disaster, they started a charity sale of second-hand items in the lounge of the dorm-building, to raise funds for Sichuan.

“Hello, we are doing charity. The money is for the quake-stricken area,” said Liu Zhuhuan to anyone who dropped by. She donated her guitar and it was sold for 40 yuan. Donating clothes is costly in terms of disinfection and transportation, so money is most directly helpful, said Liu Wenting.

Besides on campus activities,all circles in downtown are also active in the work of donation.There are five major charities in Shantou, the most active of which is Cunxin charity. The charity has assisted in several major events such as the flood in 1998, the snow storms of January 2008 and now the Sichuan earthquake. On the day right after the earthquake happened, the charity launched a collection for Sichuan victims in Shantou.

The city wide donation will last for a week.People who passed by the downtown collection sites responded actively. Most of the donors contributed more than 100 RMB. The money that had been collected would be sent to the head charity organization, then transferred to the disaster area, members of the organization said.