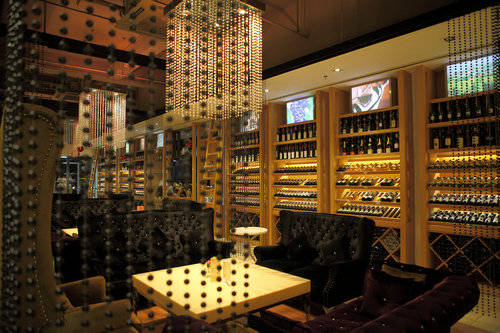 When night begins to fall, racks of dark reddish wine bottles shine through the soft-reflected light in an elegantly furnished wine store. The grape-like sheen the bottles give off can easily engage you with their bouquet, even through the cork-sealed bottles. This is the scene in retail wine stores dotting Longhu District, one of the most flourishing districts in Shantou.

Since China’s entry into the World Trade Organization, the introduction of western lifestyle choices has ramped up the consumption of Western wine in Shantou; in the last four years, at least three wine stores and bars have opened here. The heating up of the local wine industry has quickly attracted the attention of visionary dealers in wine.

Wine can be seen not only in star-rated hotels and high-end malls, but also in franchise stores. In a relatively affluent neighborhood in Shantou, Longhu District, there are three stores exclusively selling wine, namely Aussino World Wines, Wine Cellar and Vintage Wine.

Similarly the three wine stores are small in scale, incorporating a bar, thermostats and tasting facilities. Customers are able to choose among a wide range of wine imported from France, Italy, Australia and other western countries. These shops have also set up wine bars equipped with cozy sofas for business negotiations and simply hanging out and relaxing.

“The main reasons for the rapid growth of the wine industry rest with the increase in the number of people with high income and more knowledge about wine,” said Jinrong Cai, marketing and sales director of Aussino World Wines.

What he considers most rewarding is not the growing sales, but consumers’ more comprehensive understanding of wine. “In the past, people knew little about red wine,” Cai told the reporter. “The decision they made on which wine to buy is subject to the price. However, things are different now. More and more customers have good taste in identifying fine wines.”

He said another noticeable change in wine industry was simply more customers. The target consumers for red wine in Shantou used to be overseas Chinese who had been greatly influenced by western culture. These days, it has extended to white-collar workers, government officials and entrepreneurs.

Historically, grape-based wine was not as popular in China as in the West; alcohol in China has a history of 5000 years, but traditional drinks like baijiu are rice-based. But with China becoming the third biggest global market of luxuries, imported wine is making a play for equal share with traditional Chinese spirits. To join the fray, China has exploited its own growing districts of grapes, among which Changli of Hebei Province and Yantai of Shandong Province are the most famous ones. But wine produced in these areas still struggles to meet consumers’ high expectations of quality.

Foreign wine producers are also starting to see value in an Asian market. Christian Seely, marketing manager of AXA millesimes described in a recent Internet article how much French wine industry values Asian market:”The owners of Bordeaux vineyard meet more often in Hong Kong, Shanghai and Singapore than in their hometowns,” he was quoted as saying.

Both prices and import duties are making wine more affordable for the Chinese consumer.

In general, most consumers favor the red wine priced at 100-300 yuan, according to staff at the three wine stores.

“The import tariffs have been brought down several times,” said Haiming She, managing director of Vintage Wine. “The price difference of domestic wine and imported wine is negligible. In particular, red wine intermediate in price appeals to a collection of mid-range consumers.”

Currently a number of foreign countries serve as places of origin of wine on the market. “Though the long history of French, Spanish and German red wine has contributed tremendously to their fame,” said She, “a new booming generation of red wine from Australia, Chile and the United States has occupied a considerable share of the market in the last few years.”

Compared with domestic wine, import wine offers a selection in place of origin, variety, taste, price and brand and aims for a developing high-end tastes.

“The sales of famous brand wine are usually in smaller scope,” said Vivian Wei, head of the Wine Cellar. “Thus the promotion pattern of import red wine is quite distinct from that of domestic wine. Several leading brands of import red wine put a high premium on exerting a subtle influence on consumers’ refined taste.”

And the customers keep coming in.

Yu Zhang, a supervisor of Hongqiao Packaging Industry Co., Ltd in Shantou, was picking out wine at the Wine Cellar. When asked why he showed preference for wine, he replied, “Drinking wine is a way of pursuing leisurely life. Most importantly, an occasional glass of
wine has been shown to benefit health. I read a report the other day saying a glass a day may help prevent prostate cancer – so why not raise my glass?”