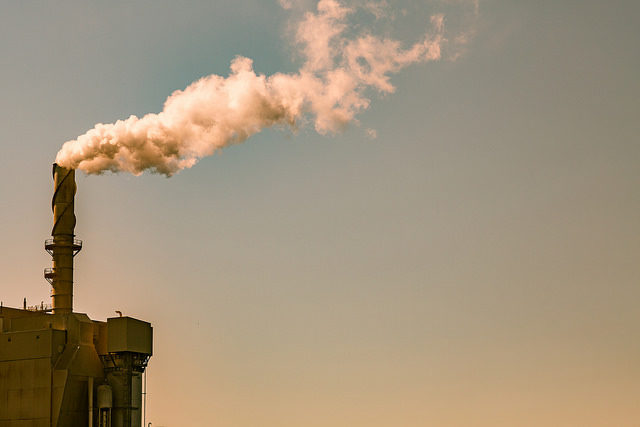 By Zhao Yanxian (Yan)
The black water in Tuoji River flows silently, with plenty of water hyacinth and white bubbles floating on its surface. Two chimneys of Piaohe paper factory emit a black tail of gas into the sky. A 50 cm wide pipe pours wastewater into the river directly day and night, and the water of Tuoji River suddenly turns white.

Not far from this pipe, farmers, who own the land on one side of Tuoji River near the factory, irrigate the farm with the river’s black water.

“The water must be harmful to us. All of the villagers eat the vegetable which grow on the bank of the river and irrigated by this water,” said Cai Qingxing, a village doctor in Judeng, who keeps records of all the villagers who died of cancer since 1992.

He started to keep records because, he said, he believes the river may be related to the sudden increase in the number of deaths from cancer.

“The river is smelly all year round,” he said.

Tuoji River, which is part of the Han River, was enlarged to 60 meters width in 1958. The water was so clean it was easy to see plenty of fish swimming in it and the villagers used the water for drinking and washing, Cai said.

Everything changed suddenly in the late 1980s. Several factories were built in Chanan County, upstream of Tuoji River. The water turned black and released a bad odor. Fish seemed to vanish. The river began to die.

“The situation was worse when the paper factory was set up in 1992,” said Cai Xiong, a 68-year-old villager of Judeng. The water hyacinth invaded the river and was so dense it could be used to cross the river, he said.

Tuoiji River is now known as the “black river” to every villager. Whenever the upstream water flows past the paper factory it turns grey and is covered with floating white bubbles.

“There is no sewage treatment in the factory absolutely,” said Zhong Chuiliang, one of the farmers in the area.

“The factory owner must have a good relationship with the government. I assume that because in February, an investigator from Beijing came to make a survey of the pollution of the river but I saw the discharge of the sewage never stop,” he said.

Li Yuanyou, an officer of another neighboring county, Tuolian, is preparing a project in water pollution for the entire Tuopu district of which Judeng is a part. He confirmed that an investigator had come and done a survey.

“It is the first time an inspector from Beijing to check the pollution and they came without any notice,” Li said.

The Water Pollution, Prevention and Control charter of China adopted on June 1, 2008, says there should be “comprehensive management.” However, environmental protection is not everyone’s priority and is sometimes seen as a matter of beauty instead of health of people and the environment.

Li said the government knows the pollution is serious, but the authority has to develop its economy first.

According to the Environmental Protection Agency of Shantou, a branch of the national governmental organization, in 2009, the Tuoji River’s water is rated as second grade water of good quality.

“Environmental Protection Agency of Shantou does take some samples from rivers in Shantou and do tests, but the results are never published,” said Li, the officer.

A researcher quoted in a 2007 article from A View on China Technology, said wastewater from paper factories is the biggest pollutant of the environment.

The wastewater is in a high temperature, filled with alkaline material and tiny fibres. These fibres float above the water and inhibit the sun light from reaching the flora and fauna at the bottom of the river, which kills them.

The ecosystem is permanently damaged by this kind of water that also has other poisons and heavy metals. The benthos flora and fauna die and the fish populations vanish. With factories’ wastewater, the river cannot recover. According to the magazine article, the second ecosystem killer is the water hyacinth.

Some fish that were transported by a flood from a pond into the river died soon after, said another farmer, Guo Chuiliang, 68.

“We cannot see any more fish in the river now,” Guo said. “My vegetables turn from green to white after a few times irrigating them with Tuoji River water. I harvested them and tried to sell them in the market but nobody preferred to buy them.”

Farmers will sell their product in Tuopu market. Some of the farmers are oblivious to the effect the water pollution has on their fields.

“Our vegetables are better than others in the market which are produced in other province. Water from river does help to the growth of vegetables because it contains fertilizer,” Cai said. “All of our villagers eat vegetables from this land.”

Doctor Cai said a villager once brought vegetables from a farmer in Judeng. She soaked them in some water until noon when she wanted to cook them for lunch. But she found some foam floating at the water’s surface.

“It should be something harmful in the vegetable, but nobody has tested it. Other people from other villages who are familiar with the situation, refuse to buy our products,” the doctor said.

Farmers use barrels of water to irrigate their fields because they have no irrigation equipment. The ditches where they pour the water were as dark and smelly as the river.

“I tried to report this problem to an officer of the People’s Political Consultative Conference last year,” the doctor said. “But the officer said to me, the pollution all over China is serious. I cannot do anything about the pollution.”