By He Qianyi (Hazel)

In a small, low, narrow room located in a quiet, dirty street with Chinese old-fashioned houses people lived, Lin Xia is standing near a pan on a fire making Shahe fen, traditional Chinese type of noodle.

Lin Xia, makes Shahe fen on the outskirts of the city of Shantou in Tuopu. Just like many women in the metropolitan area, the 40-year-old worked in a clothes factory when she was young. After getting married, Lin quit her job and moved to her husband’s home. She did not stay a housewife for long. She began to take over her husband’s aunt’s business to make Shahe fen. Twenty years later, she is still making and selling her noodles.

Shahe fen, noodles made of wheat is especially common among the local Chaoshan People. Many people in Shantou will use Shahe fen as offerings during the New Year and traditional festivals.

Making Shahe fen is not an easy job. Every day, Lin wakes up at 5 a.m., spending the whole day working in the disorderly room filled with tools and equipment used to make noodles, bags of sawdust to light fires and only one old fan.

Standing near the fire where a big round pan is heated, she uses a bamboo stick to take a piece of white, hot paste out of the pan. She rolls the paste around a stainless steel tube. She pours rice milk into the pan to make another paste, then sets the paste aside to cool it down. After the paste cools off, Lin spreads it flat on a large bamboo curved tray with large openings, then folds it into rectangular-shaped pieces. She also has to make sure the fire stays lit.

“We had to grind the rice into rice milk ourselves before, but now we can do it by machine. It is much better now,” Lin said. Lin grinds 100 kilos of rice to make rice milk everyday.

“The noodles here are the most delicious,” said a little girl who comes here regularly to buy Shahe fen for her family.

With the development of technology, many cottage industries are replaced by factories. Lin said it’s hard to tell whether hand-made or machine-made is better because different people have different tastes, but she will continue doing this because some people prefer her hand-made food.

Lin spends most of the time alone at her job but sometimes her two 19-year-old sons come to help. “They are not very good at studying but they will come to help in their spare time,” said Lin smiling shyly.

“I will keep doing this job here”, Lin said. “You need money to raise your family.” 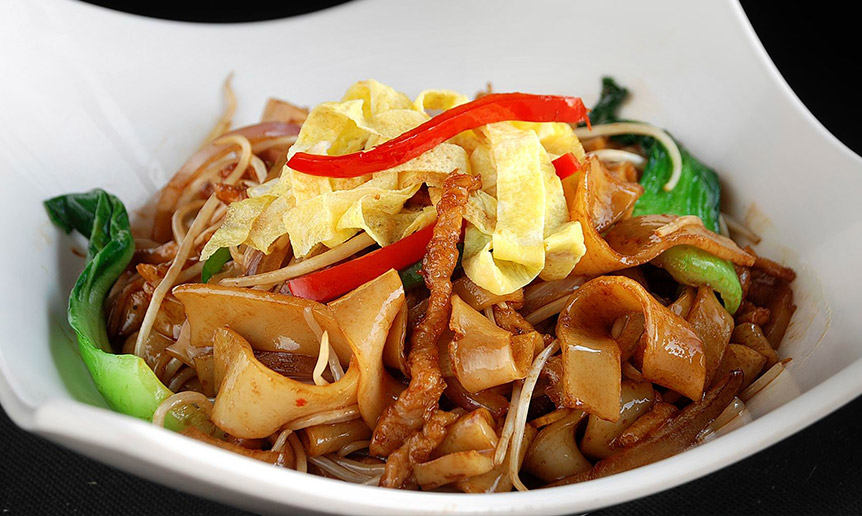 In the evening when the no.6 bus comes to a stop at the “QuanQiuTongDaSha” station, it is 10:30 p.m. A young man, ChenJia, moves his tired body to get onto the bus. The bus engine begins, and the young man looks out the window, as if thinking about something. After a while, he turns his eyes back to look into nothing. The young man sighs, looks spent, but relaxed.

ChenJia works in a small company named “Xiaofangzhou” that produces video for clients from promotional videos to wedding videos. As a graduate of a three-year junior college, the 23-year-old does not have much to complain about his job, he says.

ChenJia doesn’t earn much money, about 800 yuan a month. But that doesn’t matter to him as much as being able to keep the money he earns.

“It’s already a good thing that I don’t need their (parent’s) money, they won’t expect me to contribute any money to the family,” he says. The young man has a girlfriend who was his classmate before. They earn a little money, and have their own lives.

As the only cameraman in the company, much of the responsibility falls on him, although there is another employee learning the craft. Most of the client events are outside the normal working hours, of 9 a.m. to 5 p.m. Some are soirees or campaigns held in the evening, so he must work late even after working all day. Sometimes the video is on deadline, and he must edit it in the evening so that it can be sent to the client the next morning.

“The wealthy are having their fun, but you must take a video to film them. And then, you must look at these same scenes many times to edit them,” he says. “It is so crazy.”

“I know my job is tiresome and my labor is so cheap, but I am not afraid of that and I will persist,” the young man says. “I do everything as best as possible. I will work hard with this company. I will grow up with her, then I think I won’t waste my time and effort.”

Outside the window, the colorful light, the happy people playing in the weekend evening, the beautiful scene catches the young man’s eye. He smiles. “I really wish I could take my girlfriend to have a good weekend every week. But, I think, I will have those days.”

Then the young man gets off the bus and moves his tired body home. 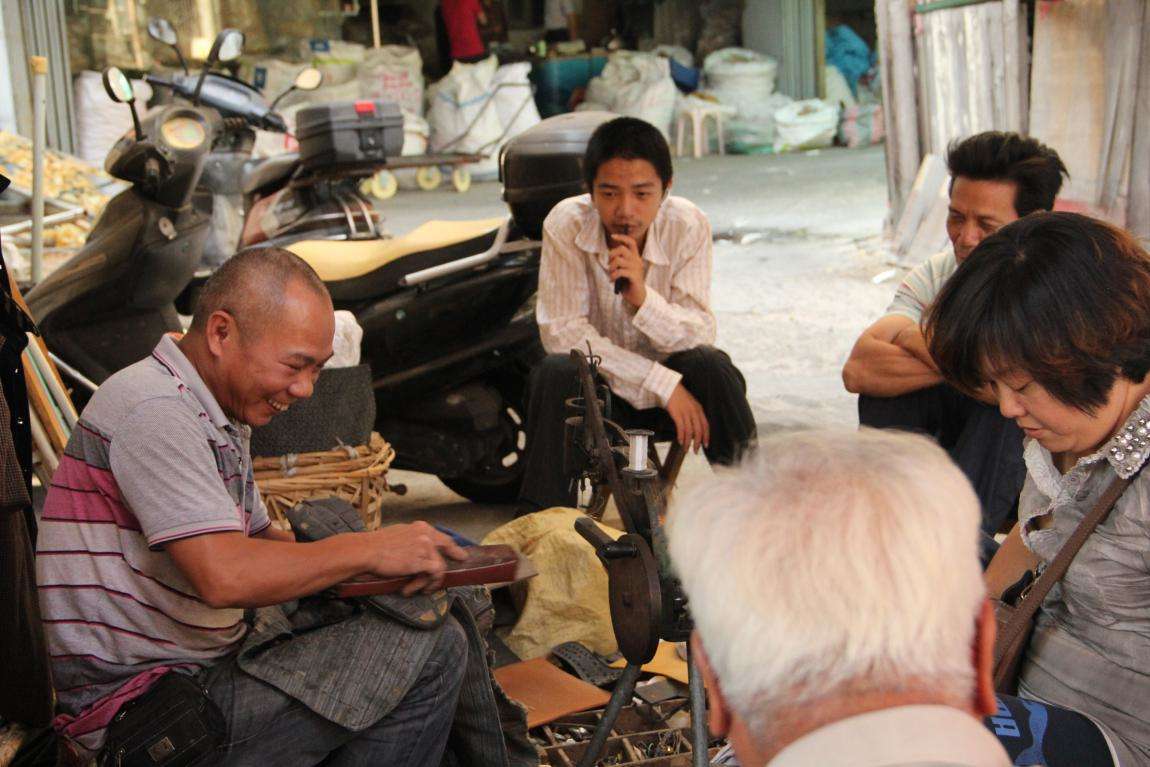 Tang Yonghua sat on his bike making plaster models on a Saturday afternoon outside the JinSha Park in Shantou while an onlooker showed interest.

The sunshine was cut into pieces by the leaves and the buildings that lined the street. Though it was Saturday afternoon, few people were on the street. Tang YongHua was sitting on his bike equipped with materials and tools to make his plaster models. About a dozen people surrounded him and looked intently at what he was doing.

“I like doing something like making artwork,” said the 59-year-old, “I feel free and happy when doing this.”

Sitting on the bike, Tang took out a big bowl and poured some clean water in it, and then poured some blue paint into it to make a more liquid paint. He threw a handful of gesso into the colorful water then used chopsticks to mix. He took up the mash and poured it into a mold then adjusted it carefully to make sure every part of the mold had been filled up. He puts the mold aside and starts another. People surrounding him and his plaster models showed amazement when, 20 minutes later the sculpture comes out of the mold. The onlookers kept asking questions. Tang YongHua was happy to answer and even happier when they pulled out money to buy one.

Tang makes four kinds of plaster models from 1 Yuan to 8 Yuan and earns about 2,000 yuan a month. Tang makes the plaster models adroitly. He said he can make about 100 of the smallest and about 40 or 50 of the biggest models a day. But he does not sell out.

“The worst day I had only 12 Yuan income. But the luckiest day I had more than 300 yuan income that was this year’s National Day,” Tang said.

He usually goes out at 9 a.m. and back home at 6 p.m. having lunch that he brings from home on the street. On the weekdays, he goes to the schools to sell them and he goes to the shopping district on weekends. He doesn’t go out on rainy days.

March last year, Tang YongHua came to Shantou from Chongqing city, Sichuan province. He came to Shantou with his wife to live together with their son, who had been in Shantou for about 10 years.

“We are not very rich but I don’t need to go out to make money,” Tang said. “My son asked me to stay home to enjoy a comfortable life with my wife, but I can’t stand not having anything to do except watching TV or sleeping. That is so boring. So I went to find a job and worked as a builder until I came here. Since the work was too hard and I was a little too old, I had to give it up.”

Later, he got a job in a toy factory where he became focused on learning how to make toys so that he could make them on his own, he said.
“As soon as I learn all the skills I needed, I left the factory. From the first day to the last, I stayed in the factory only seven days,” he said.

As soon as Tang left the factory, he asked a friend he made in the toy factory to give him some rubber. Tang then went to buy some popular toys and some Bodhisattva models, studied their structures and used the rubber to make molds of them. “Not everything went well at the beginning, but I still thought that it won’t be too hard if I keep trying. A few days later, I succeeded. I was so happy,” said Tang.

He also said he didn’t make models when he was at home, but he would spend much time to study all kinds of toys to create new ones. He made friends with two other people who were doing the same thing as him and then learned some skills from each other to improve themselves. But the other two went back to their hometown a few months ago leaving Tang as the only one who made plaster models to sell in this way in Shantou.